The first brand to run an Instagram ad is Michael Kors, which rolled out a promo for a high-end watch late this morning. And so far, users who are taking the time to comment do not appear to be fans—more on that in a bit.

An Instagram spokesperson said the retailer’s appearance represented “a kickoff” for other paid brand appearances on the social-photos platform, but wouldn’t disclose additional campaign plans. Other expected advertisers in the near term include adidas, Ben & Jerry’s, Burberry, General Electric, Levi’s, Lexus, Macy’s, PayPal and Starwood.

The Michael Kors development comes one week after the Facebook-owned property unveiled what the ads would look like and roughly a month after it was revealed that they were forthcoming.

The New York-based retailer’s Instagram promo, as seen below, doesn’t include the “sponsored” tag expected to be seen in most ads on the platform, per the Instagram rep, because the brand also posted the photo and copy—featuring the hashtag #MKTimeless—in its organic news feed. In other words, when the ad renders in the brand’s news feed it will not be marked, but when it will say “sponsored” as it appears in users’ feeds.

While the ad has garnered tens of thousands of “likes,” based on the initial comments, maybe they want to tag every ad appearance. Below are examples of various posts—many negative or sarcastic—underneath Michael Kors’ promo. 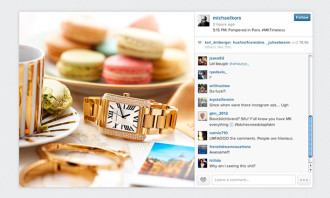 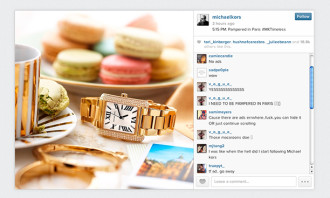 Is O&M pitching for Coca-Cola’s media account the start of a new trend?

Is this an indication that both clients and agencies are struggling with the ideal agency roster?..

Rudi Leung shares his recent HP blogger experience in Beijing and laments local marketers for focusing too much on tactical rather..

Alipay launches an ad campaign to promote a safe and international image...