A recent Marigold campaign has copped flak for its blatant use of influencers to promote its beverages.

The campaign drew some criticism for its impractical nature, with one of the influencers going as far to say that she carries a carton of the juice with her wherever she goes. Most hum the same tune that Peel Fresh products be consumed because the weather is getting hotter.

The weather lately has been crazy lah!!! 35 degrees is insane, so I’m always carrying around a carton of my favorite MARIGOLD PEEL FRESH juice (cos Juices > Water any day) which helps me stay fresh and hydrated! 🙂 #peelfreshsg #filluponfreshness

Some of the notable reactions come from Mothership, Independent Singapore and fitness online store Movement First SG’s Facebook post, which has garnered around 450 reactions and 440 shares.

Check out the pictures here: 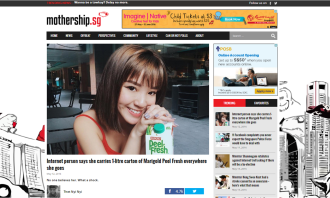 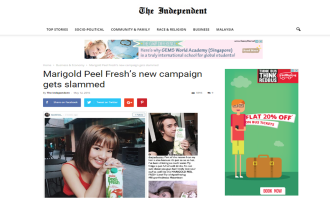 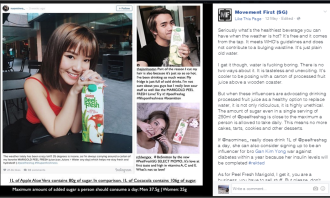 The debacle is a reminder for brands to exercise more caution when it comes to selecting an influencer who aligns well with their brand image.

The importance of brand training

According to Kimberley Olsen, business lead of Mirum x JWT’s The Social Team, brands need to ensure that proper briefing sessions are conducted amongst appointed influencers to highlight a product’s unique selling points.

“Before content is posted by the influencer, vetting of posts is crucial to ensure that while the original messaging is coming from the influencer’s point of view, the brand messaging itself does not get mistranslated,” Olsen said.

However, brand training and education is something which takes time and often requires a brand book to get familiarised with the dos and don’ts when mentioning a brand, adds Ryan Lim, principal consultant & founding partner of QED Consulting.

Allowing influencers the freedom and creative license has its merits, such as message authenticity. Unfortunately, this can come at a price where the messaging does not always align with the brand values and position. To Lim, this is a risk that brands have to consider taking when it comes to using influencers.

Relevance and authenticity are paramount

To public relations expert Edwin Yeo, general manager of SPRG Singapore, authenticity is key and not asking the influencer to do something which is “completely against their DNA”.

He stresses that brands should ensure their PR personnel are on board at all times, as PR professionals are experienced with dealing with journalists in getting authentic coverage. Yeo draws similarities between journalists and influencers.

“You should also probably consider the credibility of the influencer in what you’re trying to sell. That’s often a grey line because some brands would consider influencers as “celebrities”, but a better approach is probably to treat them as “media”,” Yeo said.

He implores brands to look past social media reach and think hard about the lifestyle the influencer leads and if that is representative of the brand’s values.

You wouldn’t ask a crime journalist to write something about your soap, no matter how popular that journalist is. This isn’t that different.

Olsen agrees with Yeo’s sentiments on not hiring an influencer solely based on their mass reach. She recommends influencers who are passionate about and fits the brand’s lifestyle.

“Get a better insight to make sure they have the right target audience that you’re after. Analyse each influencer’s network of followers – are they people who are likely to spend, or are they simply engaging with comments that are only directed at the influencer?” Olsen said.

Don’t try to pass off advertising as a real review

“Let the product speak for itself and it’s great value (if any). It’s definitely the harder but more credible route,” Lim added differentiating advertising and genuine product reviews.

Genuine reviews often require brands to send products to reviewers without paying them to say anything biased, which allows them to review a product fairly. “If the brand needs awareness quick, perhaps advertising is a much better and honorable route that trying to force credibility with awareness to the product in this case.”

He cautions that faking credibility is unwise as it is easily detectable in this age of intense public scrutiny and the crowd-sourcing of cyber detective work.

“Be authentic, be transparent and you don’t need to slap an ‘advertorial’ tag to it. People get that influencers need to make money as well, but fans hate it when you try to pass off advertising as real,” Yeo said.

Prepare to manage a potential backlash

“Never delete comments or leave them unattended as this would in majority of situations, spiral to a bigger crisis that will only turn your brand into the next trending topic of social media mockery,” Olsen said.

Can such cases be rectified?

According to Lim, the current age of social media is starving for authenticity. He recommends taking an ethical route and coming clean as there will be sufficient online folks who would appreciate the step in rebuilding credibility.

“Do right to do well. It’s not mutually exclusive,” Lim added.

Yeo on the other hand, feels that with the short attention span of the internet, there really isn’t a need to rectify the issue for the case of Marigold. Taking the NTUC Income example, he adds that the Rebecca Lim saga did not take away the fact that the ad campaign was pretty good, and NTUC made up for it with a strong creative campaign.

“At the end of the day, all Peel Fresh wanted to say was that it’s a good drink for the hot weather. If they really believe in that, then continue to bang that message home. The snarky press made the message a little less believable, but nothing a good creative campaign and a robust sampling exercise can’t reinforce,“ Yeo concluded.

The goal for Omron in 2019 is to position it as the go-to-brand for healthcare at home. ..

The agency will be responsible for Nespresso’s social media marketing and campaigns for its Singapore portfolio...