As Chinese consumers buy up a third of the world’s luxury goods, those same luxury brands are sparing no effort or expense in trying to win them over. But as we have seen repeatedly, playing in China – a country with an almost obsessive interest over how it is internationally perceived – comes with much bigger PR risks. A YouGov study has shown just how deadly those risks can be as – in the face of a recent snafu – the reputation of several luxury fashion houses has tanked in China.

In mid-August, Versace launched a T-shirt featuring a list of cities paired with their host countries, such as “New York-USA” and “Beijing-China”. A powder keg was waiting to be lit however when it described Hong Kong as “Hong Kong-Hong Kong” and Macau as “Macau-Macau”.

Images of the T-shirt were widely posted on Chinese social media with much anger directed at what netizens decried as an attempt by Versace to deny the “One China” policy, which states that while Macau and Hong currently remain semi-autonomous, they are officially part of Chinese territory. This was so contentious that immediately following the incident, Chinese actress Yang Mi terminated her contract with the brand.

Though Versace and its artistic director Donatella Versace swiftly issued an apology, saying they had stopped selling the T-shirts and destroyed all remaining stock, Versace’s impression score – which measures whether one has a positive or negative impression of a given brand – had fallen significantly. Versace, who had a score of +11.6, has since dropped 23.2 points to a negative -11.6. 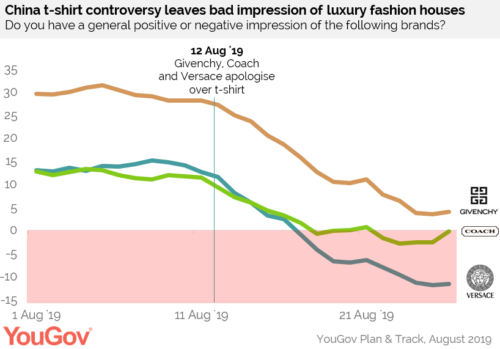 A t-shirt in the Coach 1941 collection featured a similar list of city-country pairs as the Versace t-shirt, this time identifying Hong Kong as part of Hong Kong and Taipei as part of Taiwan. Meanwhile, Givenchy’s own city-country pair up t-shirt got the entire trio of outrage in one swoop listing, “Hong Kong, Hong Kong”, “Taipei, Taiwan” and “Macau, Macao”.

Supermodel Liu Wen, one of Coach’s ambassadors, announced her resignation with the label. Meanwhile, Jackson Yee, a member of Chinese boy band TFBoys, followed instep by declaring that he would no longer be working with Givenchy.

The last time a significant drop for a luxury brand dates back to last year when Dolce & Gabanna launched video ads depicting an East Asian model attempting to eat Italian food with chopsticks. These ads were deemed racially and culturally insensitive by many commentators.

While there was a spike in the number of people seeing D&G ads, the increase was largely based on negative sentiment. D&G also had to cancel a major fashion show in Shanghai at the last minute.

Data from YouGov showed that D&G’s overall brand health score fell 14.1 points among Chinese consumers following the cancellation of the fashion show, dropping from a relatively healthy score of +3.3 to -11.4.

“Chinese consumers are an undoubtedly important clientele. Unfortunately, not one, but three big brands managed to make the same faux pas – offending people at a particularly sensitive time. Hopefully, it is a lesson that won’t repeat itself, as it is clear that even a timely apology is not enough to appease offended Chinese consumers,” said Ervin Ha, head of data products of YouGov APAC.

Chuo Senko to set up shop in Philippines

The 51-year old agency is set to finalize its newest venture by end June...

Can mounting pressure from local actors, sacked staff and the wider public turn around the government's decision to reject HKTV's ..

Different parts of the business will announce changes at various times as they finalise their redesign models, said a spokesperson..