YouGov: Maxims and Yoshinoya brand scores have nosedived from their HK political statements

Regardless of any individual’s opinion of Hong Kong’s ongoing protests – in the wake of a controversial extradition bill, various questionable actions by the government, and widely reported brutality by the city’s police force – they have resulted in economic losses, with some fearing that the economy will slip into a full recession. YouGov has studied several severely affected brands operating in Hong Kong and revealed the significant decline of their brand scores.

Since September, when Annie Wu, – the daughter of the founder of Maxim’s Caterers group – took it upon herself to make an appearance at the United Nations and denounce Hong Kong’s youth and the city’s mass gatherings, her father’s brand of restaurants have been the target of protesters.

Received by many as out-of-touch and a poor representation of the situation, Wu’s comments resulted in Maxim’s restaurants – including Starbucks, Maxim’s Fast Food, and Genki Sushi – being boycotted by many citizens and vandalised by some protesters. Unsurprisingly, these three brands have seen a significant drop in buzz scores. 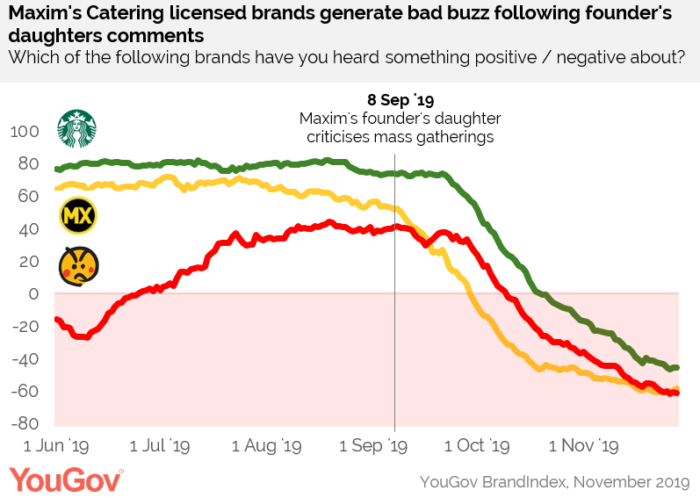 In recent months, several controversial ads also drew ire from Hong Kong consumers. In July, Yoshinoya published a post on its official Facebook page which was seen as insulting to the Hong Kong police. The creative agency responsible for the post was fired, and a swift apology was made, but many Hongkongers took this badly. On the day mass gathering began, the brand had a score of 55.7. It has since fallen 111.8 points and currently stands at -56.1.

Though these brands have recorded a particularly bad plunge in buzz scores, the F&B industry, in general, has suffered from a drop in its customer scores, which measure how many people have purchased from the brand in the past 30 days. 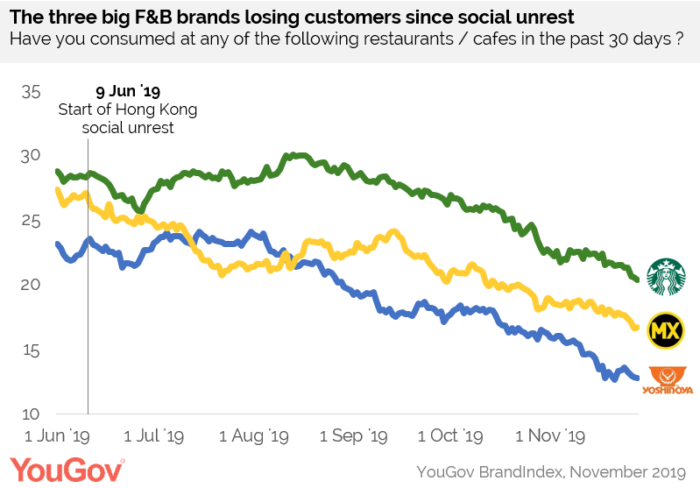 “It is not often that brands in Hong Kong lend a social voice, and even less often do we see big brands have such a significant drop in scores. It is clear in these circumstances, taking a political stance has reflected poorly in their brand health. What will be interesting to see if or when these brands will recover, as Hong Kong continues to evolve,” said Ervin Ha, head of data products of YouGov. 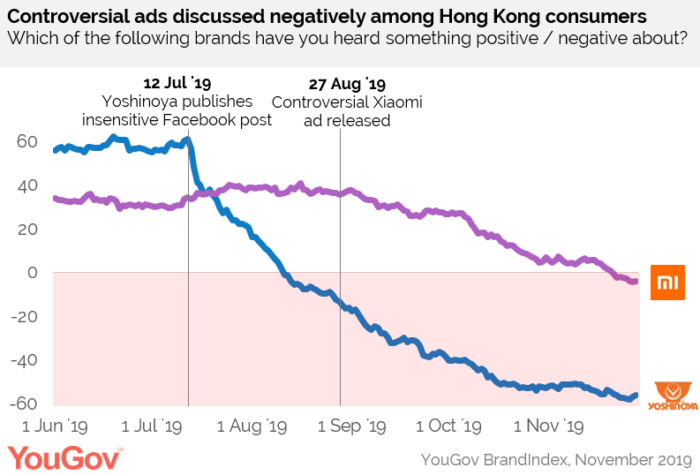 Other than F&B brands, Xiaomi posted an ad on its Weibo account in August 2019 with the slogan “five platforms, not one less”, which was read as an intentional play on the demands made by Hong Kong protesters for “five demands, not one less.”

The ad was widely criticised on Chinese social media platforms, resulting in a fall in Xiaomi’s Buzz scores. On the day the ad was released, it held a score of 36.4. It has since dropped 40.5 points and today stands at -4.1.

"The fund will be used to further promote our 'à la carte marketing and public relations services' to different industries."..

Prior to the move, speed as a factor in search ranking was only a signal focused on Google’s desktop searches...

How a publicity message went viral in China

SELYADO 2.0: top information and data security milestones in the Philippines

Data privacy and protection has never been more emphasized in one momentous event that gathered top regulatory and industry execut..