Further details have emerged regarding rumours that Japanese beef bowl chain Yoshinoya Hong Kong had terminated its contract with its creative agency Social Strategy Hong Kong (SSHK) over the issue of a deleted Facebook post. A rumour which has sparked public outrage.

On 12 July, SSHK issued a statement on its Facebook page that seemed to counter the narrative that the agency had been let go. It said that the agency was grateful for its partners from Yoshinoya Hong Kong, as the restaurant chain has been helpful in clearing obstacles, and has allowed room for creativity. During their working relationship, both parties have tried a number of experiments on social media, aiming to better position Yoshinoya Hong Kong. 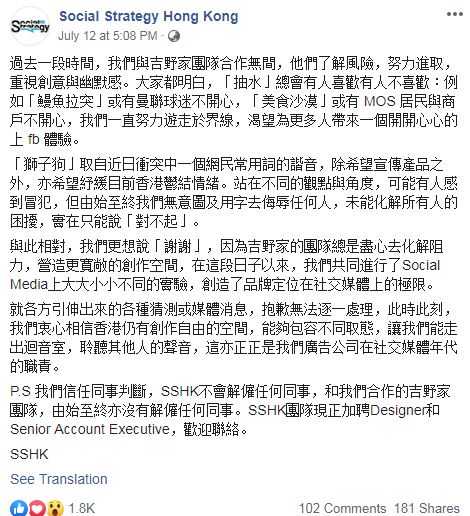 SSHK insisted that they had no intention to humiliate anyone – though the agency admitted that some people might feel offended by the post – but said they were unable to resolve every question from the public due to the complexities of the situation.

On Friday morning, a source familiar with this matter had told Marketing Yoshinoya Hong Kong was still working with the agency at time of writing and has not informed us there has been any change on that front. The source declined to reveal further details regarding the state of the partnership moving forward.

Netizens have been flocking to Yoshinoya Hong Kong’s Facebook page to protest the alleged firing, with many saying they would boycott the restaurant. During yesterday’s anti-extradition bill mass protest in Shatin, protesters pinned messages to a Yoshinoya outlet, which had boarded its windows ahead of the rally.

The situation was largely sparked by a news report from Ta Kung Pao on 12 July that said Yoshinoya Hong Kong had terminated the contract with its creative agency Social Strategy Hong Kong (SSHK) after a controversial post was made with coded references to law enforcement.

The post aimed to promote chikuwa –  a Japanese jelly-like food product made from ingredients such as fish surimi, salt, sugar, starch, monosodium glutamate (MSG), and egg white, and commonly called by the name, “獅子狗” in Hong Kong. With a message of helping better the morale of Hong Kongers, it seemed to be trying to making humorous use of phonetic wordplay to shame police officers that had torn down papers from protester “Lennon Walls” across the city.

The brand agency has won the pitch for arts and culture and entertainment hub Shanghai DreamCenter created by Hong Kong Lan Kwai F..

General manager of BBDO Singapore Intan Mokhnar will be taking on the role of managing director of BBDO Indonesia in early 2014. ..

It is understood that Kumar is currently serving notice and will leave the agency in April this year. ..