Yet another Thai ad kicks it out of the ballpark [VIDEO]

We know the ad folks in Thailand have got their creativity on point. This time the creative genius comes from a breath freshener brand, Peppermint Field Inhaler.

The brand has created an ad around a problem we are all too familiar with – road rage. It shows two protagonists in a car, one being the enraged driver and the other being his calm friend. The driver has just been treated in an unfriendly manner on the road and is about to get out of the car to take justice in his own hand. Meanwhile, his calm friend reminds him what’s at stake – his cute daughter and “sexy wife”.

Launched just yesterday, the video already has 88k reactions and over 90,000 shares.

A spokesperson from the company to Marketing, that in Thailand, the inhalers or locally known as ‘ya-dom’ are not only used to relieve nasal congestion but they are also considered essential in everyday life for their refreshing and relaxing properties.

“We also believe that everyone was born to do good in life and we are all a part of a bigger bundle of life. Thus, what is good for us shall be good for others too. We aren’t trying to just sell a good quality product but also give back to the Thai community, we want to remind people to get back to their senses and be considerate of others and thoughtful of the consequences,” he said.

The issue the company hence chose to portray in the video is a common problem in Thai society which has an influence on the daily life of road commuters.

“With this video, we hope to remind people that sometimes if you just stop to take a breath and get back to your senses it could really be a positive impact to their lives and society as a whole,” he added.

According to video marketing firm Unruly, Thai advertisers have understood and embraced the importance of creating an emotional connection with their audiences for years.

“As a market, Thailand does seem to be more receptive to emotion in advertising – with almost every intense emotion being evoked among a higher percentage of Thai viewers than the global norm,” said Phil Townend, Unruly’s chief commercial officer, APAC.

A quick study by the team showed that exhilaration and happiness are particularly prevalent among Thai viewers – the average ad evoked one or both among 22% of viewers versus a global norm of 4% for exhilaration and 11% for happiness.

Some of the less utilised emotions such as sadness and nostalgia are harder to evoke (2% and 4% respectively for Thai viewers), but are actually incredibly powerful – especially when combined with an emotional high like inspiration or warmth. The positive feelings are amplified by the previous emotional lows – and it’s this emotional rollercoaster that we see employed in a lot of great Thai ads. 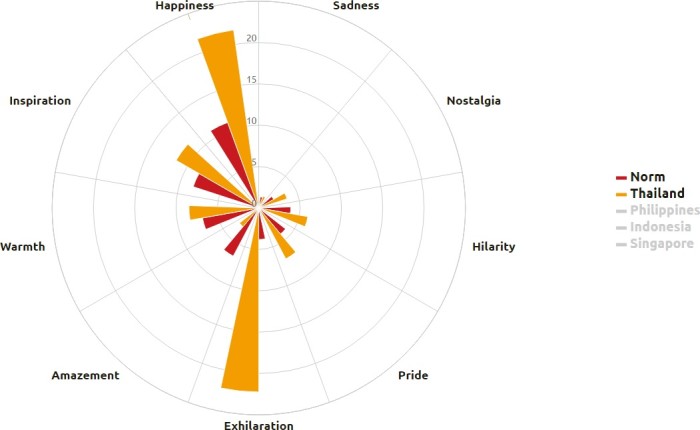 Meanwhile,executive creative director at GOVT KL, Casey Loh agreed that the ads that emerge out of the Thai market truly do stand out. Loh said that the Thai’s have a self deprecating sense of humour where they can actually take a step back and look at the society as a whole and even have a laugh at themselves.

However, with the advent of social media, many brands in Singapore and Malaysia now want to be politically correct because of the fear of backlash.

Amit Sutha, managing director of Ensemble Worldwide and Universal McCann, said that ultimately work gets curated not just by current trends but also by local culture.

“For a second let’s forget Thai advertising. The country itself is one of the biggest exporters of creative goods to the world. Street art, Indi music these are all so big. It’s not that difficult to guess why their ads are so powerful,” he said.

Sutha added that one of the reasons why Malaysia Singapore advertising is different is that the industry looks more towards the western world for inspiration.

“We as an industry are getting better at using techniques and technologies to make people change behaviors and that’s a good thing. But while we are doing more of that, we sometimes forget about the raw power of hyper local habits and beliefs,” he added.

StarHub links up with VWOs to celebrate SG50

With the Singapore's Golden Jubilee fast approaching, StarHub has partnered up with nine voluntary welfare organisations (VWOs) to..

It recently partnered Plaza Singapura for an insta-worthy night out at The Dessert Museum, while it also concluded the GaiGai at S..

Singapore Grand Prix to come to an end in 2017?

"Look at what we have done for Singapore. [...] Singapore was suddenly more than just an airport to fly to or from somewhere. Now ..

Marketing sex in a PG13 world

As the final phase of Durex’s Performan campaign rolls out, the creative brains tell Marketing the challenges behind developing a ..