Which APAC nation is rich in brand value?

A new study has found Singapore’s brand ranking to drop several spots globally, while other Southeast Asia countries such as Malaysia and Indonesia saw a rise in brand value and position. This was according to Brand Finance’s Nation Brands 2017 report.

Singapore’s ranking saw a drop from 27th place to 31th place and saw a 1% decrease in brand value. This was from US$469 billion in 2016 to US$464 billion in 2017. However, despite seeing a drop in brand value, the country managed to maintain its position as the strongest nation brand this year, according to Brand Finance.

The study added that Singapore had a brand strength index (BSI) of 92.9, and has been found to be the only brand to have scored over 90. This was from a boost from its “people and skills” result, which was factored in the BSI calculation.

Its good “people and skills” score was a result of Singapore’s reputation for investing in its citizens. This was through the country’s SkillsFuture movement which was initiated by the government. The movement allowed every Singaporean aged 25 and above to secure SG$500 for professional development, in the process helping to maximise the nation’s potential.

According to Brand Finance, more than 400,000 people undertook training in 2016, which was an increase from 379,000 in 2015. As such, the country’s willingness to invest in the development of its people demonstrates a “nurturing element” that many other nations have yet to adopt, the report added.

Countries such as Vietnam, the Philippines, Thailand and South Korea saw 37 to 43% increases to their nation brand value. This was due to factors such as foreign direct investments, higher rates of economic growth and trade as well as business process outsourcing as the main driving forces.

The study also saw the rise of brand China. According to Brand Finance, China’s nation brand value grew 44% year on year in relative terms, or at a 20 times faster in pace than the United States’. However, US$10.2 trillion, the country’s nation brand value is still only half that of America’s.

Chinese companies also make up 50 of the Global 500 most valuable brands, increasing from only 8 in 2008. This was in four sectors, namely banks (ICBC), spirits (Moutai), insurance (PingAn) and real estate (Dalian Wanda).

According to the report, China is the fastest-growing nation brand of 2017 in absolute terms, with a change of over US$3.1 trillion year on year. This figure is equal to the entire nation brand value of the United Kingdom, which illustrates just by how much China is outpacing other countries. 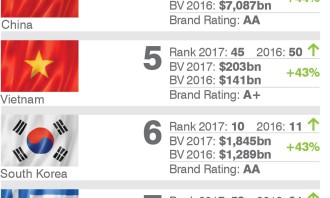 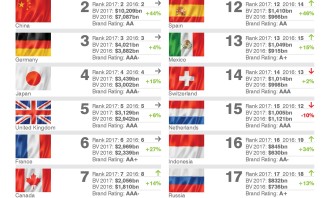 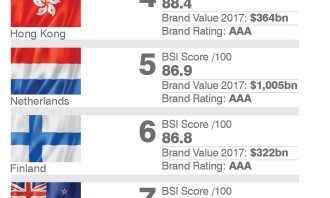 Brand Finance measures the strength and value of the nation brands of 100 leading countries by using a method based on the royalty relief mechanism. This method is employed to value the world’s largest companies.

As part of the deal, iflix will now have access to over six million original Indonesian story uploads on Wattpad...

Razer partners with Berjaya Corporation to launch e-wallet in Malaysia

More than 6,000 retail and F&B outlets will accept Razer Pay, with participating brands including 7-Eleven, Starbucks, Singer, Cos..

The luggage-maker aims to make China its biggest market within five years, pinning its hopes on e-commerce and social media to fue..

Singapore - Unilever and Lowe share their experience of making Clear shampoo's breakthrough US commercial from Singapore...