This growth will be driven by improvement in the global economy, the spread of programmatic buying, and the rapid rise of mobile advertising.

According to ZenithOptimedia’s new Advertising Expenditure Forecasts, global adspend will see a boost this year by the three ‘semi-quadrennial’ events – the Winter Olympics, the football World Cup, and the mid-term elections in the US – which will benefit television in particular.

Advertisers are also gaining in confidence as growth returns to the Eurozone, which now looks more stable and less likely to deliver more negative shocks to the world economy.

In general, advertisers are in a strong position to invest in expansion, with large reserves of cash and high profitability. In view of this, we expect growth to increase in each of the three years we forecast.

Traditional display (banners and other standard formats) is growing at 16% a year, boosted by the revolution in programmatic buying, which provides agencies and advertisers with more control and better value from their trading.

Social media, growing at 29% a year and online video, growing at 23% a year are also starting to benefit from programmatic buying. Internet display is forecast to overtake paid search growing at 13% a year for the first time in 2015. 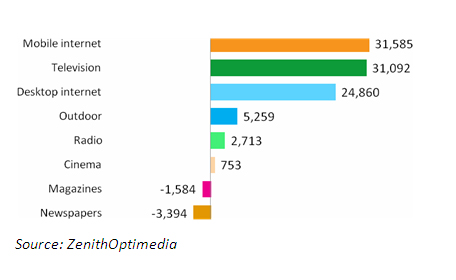 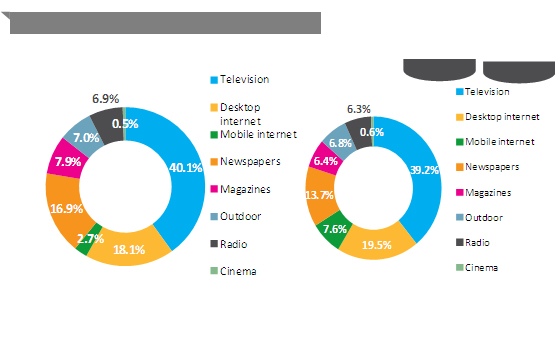 Mobile still on the rise

Mobile advertising has now truly taken off and is growing six times faster than desktop internet and is forecasted to grow by an average of 50% a year between 2013 and 2016. This is driven by the rapid adoption of smartphones and tablets.

This means mobile will leapfrog radio, magazines and outdoor to become the world’s fourth-largest medium by the end of our forecast period.

“Advertisers are gaining in confidence as the world economy returns to stable growth. They will find plenty of opportunities to generate strong returns on their advertising investment in the fast-growing digital media, but should remember that television has lost none of its power to reach large and engaged audiences,” said Steve King, ZenithOptimedia’s CEO, Worldwide.

Television attracted 40% of spend in 2013, nearly twice that taken by the internet (21%). The agency forecasts television adspend to grow 5.2% in 2014, up from 4.4% in 2013, as it gains the most of the benefits of the Winter Olympics, football World Cup and mid-term US elections.

The cities are Yogyakarta, Semarang and Palembang...

To promote its latest self-ordering kiosks, the fast food giant has launched its ‘No-crew store’ initiative in select restaurants...

Through a series of social videos, the photographers - who Canon describes as "EOS R Rangers" - present not only their unique inte..

HSBC Insurance brought interactive badminton-themed activities - both in VR and in the flesh - to the heart of Hong Kong in suppor..