Toshiba has launched “The World’s Best Friend” campaign to promote its latest air-con, bringing on board Ah Boys to Men actor and local rapper Tosh Rock, and the universally loved Shiba Inu as brand ambassadors for the campaign. The campaign will run for two months and Tosh will be ambassador for the next six months.

Toshiba, through its joint venture with Carrier, aims to be the “world’s best friend” by reducing the impact on global warming with its latest appliances. In a statement to Marketing, a Toshiba spokesperson said Tosh’s belief in climate change and environmental-friendliness was one of the reasons it selected him to be a brand ambassador. In addition, the spokesperson added that Shiba Inu is a Japanese breed of dog which is similar to the Japanese brand as well. 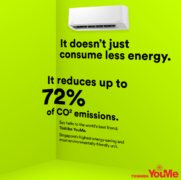 There will also be digital and on-ground activations, with Tosh making event appearances and also promoting through his social media channels. Newly formed 8traordinary was behind the creative and digital duties for the campaign. As part of the campaign, Toshiba is also running a contest on Instagram for customers to take part and experience the new air-con as well as a free staycation.

Why McDonald's Malaysia sets aside a budget for strange delivery requests

The event will take place on 25 June featuring a social photography sharing, virtual reality, themed food and games that aims to e..

VML was named as digital AOR following a multi-agency pitch initiated in February 2015...

"FMFA has been made as a scapegoat for the decline of the live events industry in Malaysia, particularly when it comes to events t..

Kantar TNS, one of the world’s largest research agencies with experts in over 90 countries, recently launched the 2018 Corporate R..