Singapore has topped the charts globally for having the most number of female CEOs, according to a study by the Credit Suisse Research Institute (CSRI). Alongside Italy, both countries were tallied with 15% female CEO representation. The Lion City also has 23% of women in management positions.

Meanwhile, Southeast Asia countries Thailand and Philippines were close by with 9% and 8% female CEO representation respectively. Indonesia is not too far back with 9% of female CEOs in the country, while women in management totals to 19%. However, Malaysia lags behind the rest of the markets in the region with 0% of female CEO representation. Malaysia has 23% of women in management but lacks in gender diversity in CEO positions.

The report said greater seniority of women in management in Asian countries is likely due less to regulatory pressures and more to equitable opportunities where education is concerned, amid the rapid growth and emergence of new industries and the demographic profile of these economies. 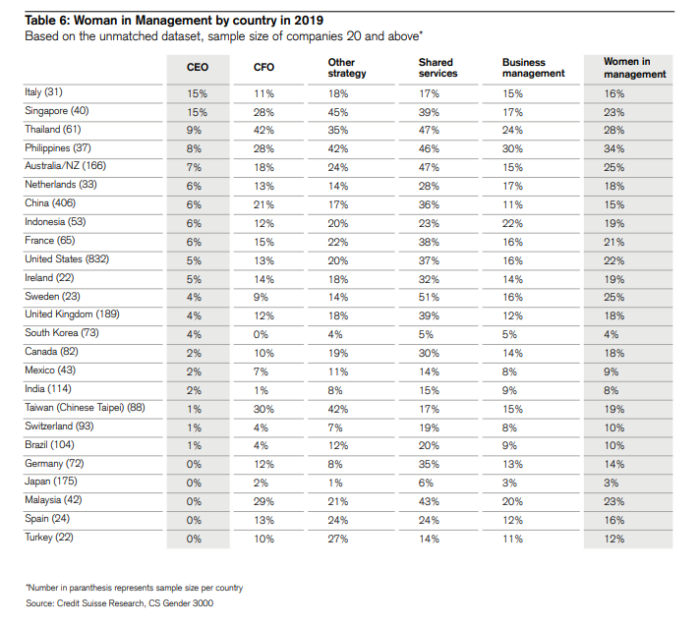 The study finds that companies with at least 5% of women on boards have an average of 18% women in management, while this proportion increases as the percentage of women on boards rises. According to CSRI, the impact of greater diversity in the boardroom leads to a better gender balance in executive functions. The research was conducted on over 3,000 companies stretching across 56 countries and comprising 30,000 executive positions, which assessed women in and around the C-Suite levels in a company.

Mediacorp unleashes new brand position, says it will 'go where its audiences go'

Montgomery will work to expand adoption of these best practices in international markets...

Nissan Malaysia has launched an ad this Hari Raya which is bound to bring a tear to its viewers eyes. ..

Lazada goes all out for its second birthday

Lazada will be utilising various advertising channels for their birthday campaign, from offline platforms to social media...

Brands eager to get on Apple Watch