SEA surpasses US and India in adoption of conversational commerce, finds FB study

Southeast Asia has surpassed countries such as the US, Mexico, India, and Brazil in both awareness and adoption of conversational commerce. According to a new study by Facebook and Boston Consulting Group, Thailand (40%) and Vietnam (36%) had the highest number of respondents who had undertaken a conversational commerce transaction, followed by Indonesia (29%), Malaysia (26%) and the Philippines (23%).

Conversational commerce involves conversational the process of having an online chat with a brand or seller in the lead-up to a purchase or post-sale, where buyers place or confirm a final order with a brand or seller over social messaging applications or over chat on eCommerce websites. Out of the 8,864 buyers, sellers and experts surveyed, 5,391 respondents were from Southeast Asia.

The study said that conversational commerce users are a diverse age group.

In Southeast Asia, middle-aged women living in a middle income household within cities, are more likely to be conversational commerce users.

The exceptions to this are in Malaysia, where users are amongst younger shoppers and those in Vietnam, where there are more users from the older age groups. On the other hand, only an average of 49% of shoppers across the other countries surveyed have heard of this term and the adoption rate is still nascent – Brazil (11%), India (10%), Mexico (6%), and the US (5%). 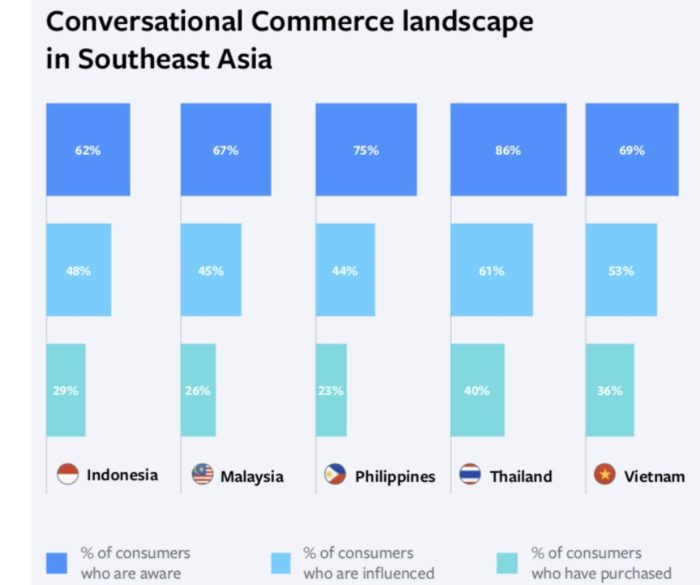 According to the study, the key pain point across all the Southeast Asian markets surveyed is having trouble understanding the product, followed by delayed replies from the seller. As such, conversational commerce enables brands to build trust with consumers, ensuring that prices are transparent and listed accurately on the platforms (50%), questions are replied promptly (48%), and delivery is as per the promised timeline (48%). 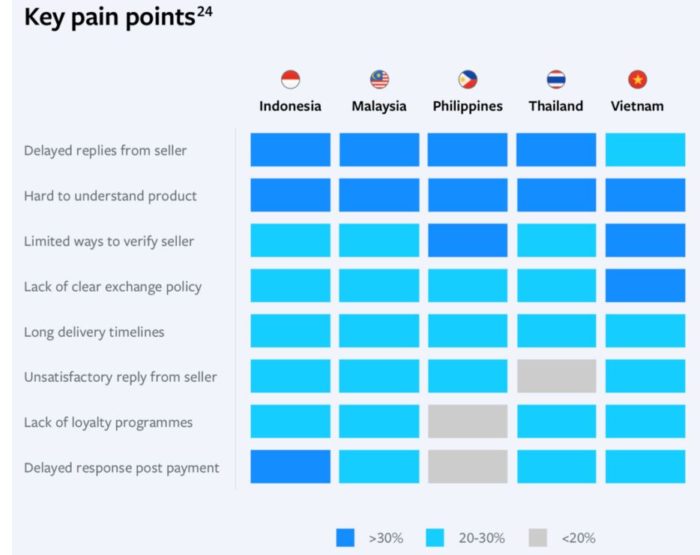 Respondents from all the Southeast Asian countries surveyed for the study highlighted access to additional product information as a key motivator behind using chat for an online purchase. More than half of them (57%) chat to get additional information on products or pricing information, while 35% use chat to negotiate on price. Additionally, 34% said they chat to establish trust with the seller.

The study also found that 60% of Southeast Asia respondents are comfortable chatting with a bot for basic product details, delivery status updates and detailed product photos. Vietnam (62%) and Malaysia (60%) in particular ranked the highest when it came to having a comfortable relationship with automated chatbots, followed by the Philippines (55%), Indonesia (53%) and Thailand (47%). Conversational commerce cuts across categories and people show higher preference for chat when buying clothes (67%), food delivery (36%) and footwear (32%). 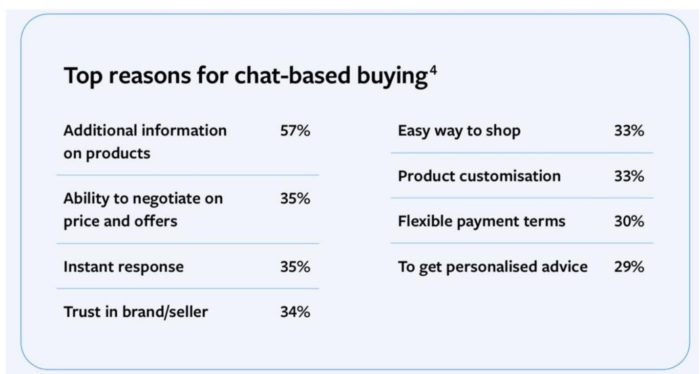 However, research shows that for more complex transactions such as price negotiation, handling complaints and advice on product suitability, consumers prefer a human to take over the conversation, signalling an opportunity for hybrid bots.

Shiv Choudhry, MD and partner of Boston Consulting Group and leader of the consumer and retail practice group in Southeast Asia, said what is truly astonishing is how quickly conversational commerce is transforming the global digital commerce landscape. He explained that Southeast Asia is currently experiencing rapid adoption rates, closely mirroring the evolution in China, where established eCommerce players are taking significant steps to adapt to this emerging market potential.

Meanwhile, Sarita Singh, director, global business group, Southeast Asia and emerging countries at Facebook, said conversational commerce is growing across Southeast Asia as it combines the best of both worlds – the personalised advice consumers would get in a physical store with the sheer convenience and variety available to them on eCommerce retail channels.

Google snaps up Fitbit for US$2.1bn, users to retain control of data

Prior to his role as CMO at NAB, he worked for three years with McDonald’s...

Passengers can hail a taxi through app and pay by Octopus

Hong Kong notorious cash-only taxi scene is making steps towards cashless as more passengers can now hail a taxi through an app an..

The geo-location app allows users to see the history and heritage of their locations...

Rafiq, joins BBDO from JWT where he spent 15 years. ..

8 highlights for marketers from Facebook’s F8

Preetham Venkky, of KRDS Singapore, on what marketers need to know from Facebook's F8 conference...