It seems like Singaporeans want to be recognised by brands on social media. While brands have already started advertising by paying popular social media users, better known as influencers, to promote products to their legions of followers, it seems like every day consumers are hungry for a similar opportunity.

60% of social media users would be willing to have a brand logo and the words “sponsored by” in the bottom corner of their profile photo on all their social media accounts. Similarly, 58% would be up for allowing a brand to do the same for each post on social media.

According to data by YouGov Omnibus, which surveyed 1,012 social media users in Singapore between 5 and 12 December 2017, approximately 60% of respondents are willing to have a brand logo and the phrase “sponsored by” at the bottom corner of their profile photo on their social media accounts.

More than half (58%) of those surveyed  are also open to allowing a brand to do the same for each of their posts on social media.

When it comes to traditional media, 59% of Singaporeans are willing to appear on TV endorsing a brand they liked in an advertisement. However, YouGov described TV as “one of the most divisive” forms of advertising, with consumers aged 16 to 24 years old (65%) being more willing to star in an ad as compared to those over 55 years of age (40%).

Meanwhile, 39% of Singaporeans are also willing to wear a shirt or top of a major sports team, with a large picture of a brand’s logo on it for a year. Also, about 6% are willing to get a permanent tattoo of the logo of a brand they liked. Also, 42% would be up for a brand placing a billboard on the outside of their home. 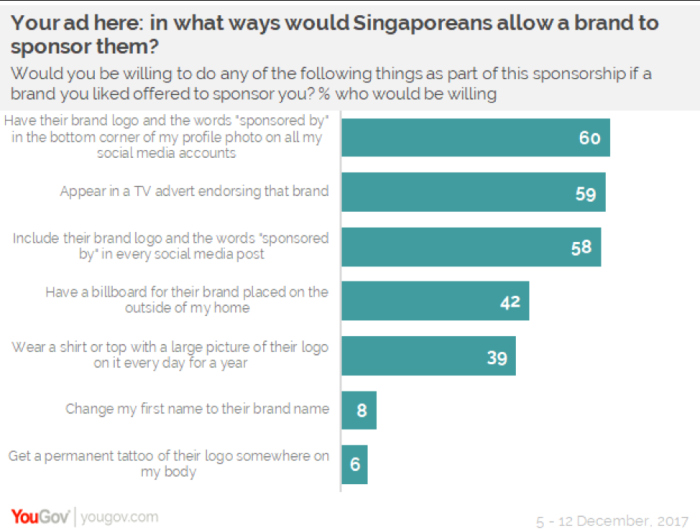 Additionally, Snapchat (69%) and Pinterest (68%) users are most likely to allow a brand they like to advertise on their profile photo for cash. This was followed by WeChat (66%) and Twitter users (66%). Facebook (61%) users were ranked last. Snapchat (72%) and Line (67%) users were ranked the most willing to let brands sponsor all of their photos posted. Pinterest (66%), WeChat (64%) and Twitter (64%) users were also listed among the top five most willing consumers. 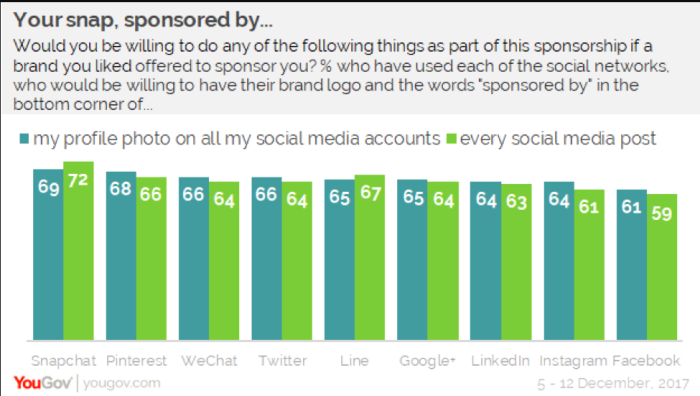 Are you game to do any of the above? Perhaps find a new inspiration for a tattoo?

Top 10 brands that Hongkongers are proudest to work for

This out-of-home execution aims to maintain the bank's share of voice in the market...

TripAdvisor today announced the appointment of Anne Bologna as vice president of brand strategy, tasked to lead the travel site’s ..