McDonald’s took its McDelivery mobile app offline following user reports of its app sending a barrage of push notifications to users’ mobile phones. The notification was promoting the McDonald’s Samurai Burger, with the message “Charge ahead to honour your appetite. There’s no holding back when you want the Samurai Burger.”

A quick check by Marketing saw one such user receiving around 45 push notifications in a span of five minutes. Screenshots from other users seen by Marketing also expressed irritation at the sudden slew of notifications, with one user commenting “There’s no holding back when it comes to spam notifications too.” 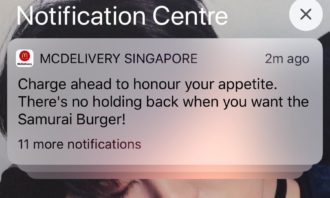 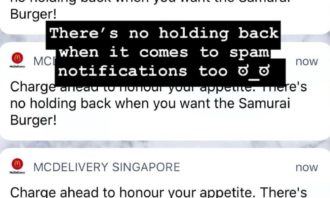 In a statement to Marketing, a McDonald’s spokesperson said that the organisation is aware of the multiple notifications that was sent out via our McDelivery app this morning.

“It was an unfortunate technical glitch and we’re sorry about it. Our IT team managed to resolve the issue in under an hour and the McDelivery mobile app is now in good working order. We would like to thank our customers for their kind patience,” the statement read.

McDonald’s has also issued a public apology on its social media pages. The post was met with reactions of users saying they would delete the app or turn off push notifications. Many others demanded for discount codes and freebies or told McDonald’s to launch a “Spam Burger”.

Earlier this month, McDonald’s released a spot touting the return of its popular Samurai Burger, leverage on animated shorts to convey the product’s return. At the time of writing, the spot garnered around 214,126 views at the time of writing. A follow up video was also posted which quizzes viewers on how many times the Samurai in the video sliced the lettuce.

Most recently globally, McDonald’s Q3 financial results saw its “international lead” segment bringing in an increase of 5.4% in terms of Q3 comparable sales. This was primarily driven by its Australia, UK and France markets.

The segment’s operating income was flat, although increasing 3% in constant currencies, as sales-driven improvements in franchised margin dollars were mostly offset by the comparison to a prior year gain on the strategic sale of property in Australia.

For McDonald’s “high growth” segment, which includes markets such as Hong Kong and China saw third quarter comparable sales increasing 4.6%, led by strong performance in Italy and the Netherlands, and positive results across most of the segment. The segment’s prior year operating income also included a gain of approximately US$850 million related to the sale of the company’s businesses in China and Hong Kong, partly offset by unrelated impairment charges. Excluding these items, the segment’s operating income decreased 5% (1% in constant currencies) due to the impact of refranchising.

These figures were higher than McDonald’s US Q3 performance, which brought in a comparable sales increase of 2.4%, driven by growth in average check resulting from both product mix shifts and menu price increases.

Overall, global comparable sales increased 4.2%, reflecting positive comparable sales in all segments. The statement added that due to the impact of the company’s strategic refranchising initiative, consolidated revenues had decreased 7% (5% in constant currencies).

McDonald’s also emerged as the most positively talked about brand amongst Millennials in Singapore, new data from YouGov BrandIndex revealed. The American casual dining chain tops the latest YouGov’s rankings, which consider the brand 18 to 34 year old consumers have discussed with friends in favourable terms.

Why when Clarks says Asia, it doesn’t just mean China

The 2020 transformation imperative: Why firms must do good to make money

"Purpose is not the sole pursuit of profits but the animating force for achieving them."..

"Answering work-related messages at 10 pm, or handling pitch briefs with one-week deadlines, should become a thing of the past."..

The job cuts will involve 190 managerial positions, representing 25% of management...

This is because of the lyrical content of the song. ..