Malaysian consumer confidence has been ranked the 28th globally, increasing by seven percentage points (pp) to 94, compared to Q2 2016.

Confidence levels in Southeast Asian countries continue to dominate the top 10 spots globally globally, with four out of six countries in the region scoring above the 100pp mark, according to the latest Nielsen Global Survey of Consumer Confidence and Spending. The average global consumer confidence is 104 pp, up by three compared to Q4 2016.

Despite its ranking at 28, Malaysia was the second lowest in Southeast Asia.

Consumers in the Philippines emerged the most confident globally at 130 pp, down by two from Q4 2016. Indonesians clinched the third place at 121 pp, up by one. The Vietnamese came in fifth at 117 pp, up by five, and Thais were ranked 10th at 107 pp, down by three. Meanwhile, Singapore was ranked 31st globally with a score of 89 pp, up by three compared to Q4 2016.

Richard Hall, MD of Nielsen Malaysia, however, remained confident saying the second quarter of consumer confidence in Malaysia has shown a positive improvement. He added that the increase in confidence is possibly a result of the improvement in key economic indicators, a stablising currency and no major shocks in the system.

“However, while the index remains marginally below the neutral level, we see that any increase in consumer spending towards the second half of the year will be driven by continued positive economic news and price stability,” Hall said.

The economy (47%), job security (22%) and increasing food prices (18%) have been listed as main concerns among Malaysian consumers in Q2 2017. Despite positive economic indicators, 83% of those surveyed said they believed that the nation is still in a recessionary state.

Nonetheless, 52% of Malaysian consumers perceived their state of personal finances to be either good or excellent in the next 12 months, which is a 7% increase compared to Q4 2016. Also, 44% of respondents indicated the employment outlook over the next 12 months to either be good or excellent, compared to 35% in Q4 2016. Other key areas of concern that saw a slight increase compared to the prior two quarters include work-life balance (15%), debt (15%) and crime (8%).

Hall noted that the question of the disconnect between the economic indicators and consumer sentiment still remains. Although both are increasing, they still show that the average Malaysian consumer is not experiencing the impact of the positive growth at a grassroots level.

“Whilst the economy remains the number one concern for half of the nation’s consumers, uncertainty will most likely intensify as the election period approaches, which is on the horizon,” Hall said. 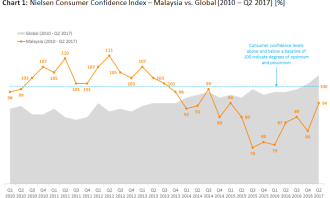 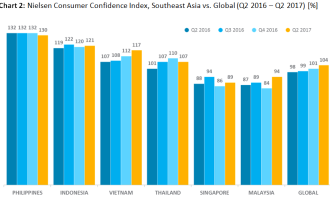 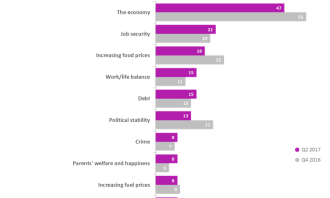 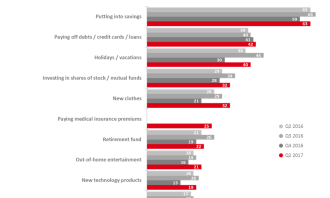 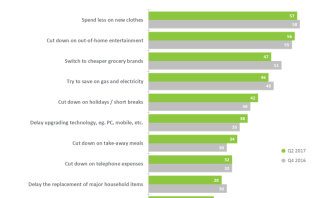 Savings are a priority but Malaysians are also indulging

When it comes to saving intentions, consumers in five Southeast Asian countries continue to lead worldwide. Thais were ranked second globally (69%), while Indonesians and Singaporeans tied for fifth (66%). Malaysians and Vietnamese ranked seventh (63%), while Filipinos came in at 11th with 58%. According to the survey, the global average of consumers depositing spare cash into savings went up by 2% to 52%, compared to Q4 2016.

Whilst focusing on savings, Malaysian consumers are also seen to be planning for their golden age by stretching any extra cash into investing shares of stock/mutual funds (32%), paying medical insurance premiums (25%) and saving for their retirement fund (22%).

Meanwhile, when it comes to big-ticket items, 40% of Malaysians would spend on holidays/vacations and 32% on new clothes. The survey also revealed an increase in other self-indulgent expenses as compared to Q4 2016, with 21% spending on out-of-home entertainment and 19% on new technology products.

“Malaysian consumer’s intention on spending more is clear. However, this seems to be focused on more indulgent items – which may be due to a relief from the pressure they’ve felt at the start of this year. The spend, coupled with an increase in efforts to save and clearing of debts, may mean that we don’t see this impact at an everyday spending level,” Hall explained.

Nonetheless, Malaysians still remain prudent about their spending habits, with 84% of respondents indicating they have changed their spending habits to improve household savings in the past 12 months, and 57% stating they have spent less on new clothes. More than half (56%) stated they spent less on out-of-home entertainment and 47% switched to cheaper grocery brands in the past year in an effort to cut back on household expenses

However, should economic conditions improve, at least one-third of Malaysian consumers are expected to continue to save on gas and electricity (33%) and reduce on out-of-home entertainment (33%), while about one-quarter of the respondents said that they will spend less on new clothes (28%) and switch to cheaper grocery brands (28%).

Four in six of the FMCG super categories recorded a positive growth in Q2 2017 with health and wellness (10.4%) registering double-digit growth followed by snack and confectionery (5.5%), personal care (3.9%) and household (0.9%). On the contrary, both the beverage and grocery categories slipped slightly by 5.3% and 1.2% respectively, as compared to the same period in 2016.

“The improvement in sentiment has yet to filter through to the FMCG sector sales. The year to date indicates a sharp downturn – although the decline has slowed somewhat during the second quarter. Nevertheless, there’s hope the current positive economic environment will encourage increased consumer spending in the second half of the year,” Hall said.

Established in 2005, the Nielsen Consumer Confidence Index is published quarterly in 63 countries to measure the perceptions of local job prospects, personal finances, immediate spending intentions and related economic issues of real consumers around the world. Consumer confidence levels above and below a baseline of 100 indicate degrees of optimism and pessimism. Within a country, period-to-period movements of seven points or more are considered statistically significant.

The appointment follows a two-way pitch held on 23 February this year...

Tik Tok ban in Indonesia lifted after one week

The move follows after the company vowed to comply with rules and regulations to make its platform more appropriate content-wise...

The defendant, a 77-year-old woman with poor eyesight and reportedly good work ethic, was accused by the brand of pocketing gift s..

Mediacorp shuts down print versions of 8 DAYS, i-Weekly and ELLE

The company confirmed that a number of roles will be affected following the changes, which will see Mediacorp working to retain an..

Carlsberg Malaysia is one of the nine Carlsberg Group markets globally, and the only brewer in Malaysia to celebrate Global Beer R..