Italian luxury automotive company Automobili Lamborghini achieved a new milestone in June this year when it hit 20 million followers on Instagram. Its Instagram activity started in May 2012 and its following has grown steadily with an average annual growth of more than three million users per year.

In an interview with Marketing, CEO of Asia Pacific Matteo Ortenzi (pictured below) said that 24% of its customers globally are under the age of 40. With its increasing emphasis on social content development and engagement, as well as greater integration across its traditional and digital channels, it expects its number of Instagram followers to rise further.

Millennials are a key component of Lamborghini’s marketing strategy and Ortenzi described them as a generation that “defies stereotypes and defines its own rules”, much like the company’s brand identity as an outsider that challenges the status quo.

“Rather than seeing this as a challenge, we embrace the opportunity to tell the Lamborghini story and create valuable and meaningful connections with this audience,” he said.

Meanwhile, having high follower numbers on social media, however, does not necessarily translate to sales. As such, Lamborghini uses social media as a tool to further strengthen the brand proposition, fuelling brand desirability and memorability for its customers and the wider audience. 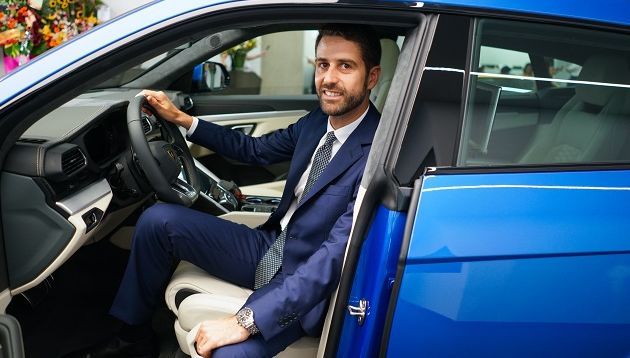 “Conversation is done via personalised experiences with our potential leads. We believe that in luxury, building personal relationships is a key to success,” Ortenzi explained. Like many brands competing in the experience economy today, Lamborghini believes in creating experiences, especially unique and thrilling ones, and not just automobiles. This ties in with its brand promise to ensure that the customer journey is defined by luxury experiences, a great and playful spirit and the best service, Ortenzi explained.

“Our main goal is to cater to loyal customers’ needs by offering first-hand information, inviting them to closed-door previews, while inspiring them with new engineering solutions and futuristic concept designs,” Ortenzi said. The company has also created a driving event platform for consumers to master and improve their driving skills on challenging circuits worldwide.

During the first half of 2019, Lamborghini saw a 96% increase in cars to 4,553 units delivered to customers worldwide compared to the previous world. According to the company, the figures mark another record and even surpassed the full year sales numbers of 2017. Asia Pacific more than doubled sales to 1,184 units and was ranked the region with the second strongest growth. North America came in first while Europe, Middle East and Africa came in third.

Besides creating personalised experiences, Ortenzi also attributed its successful growth to its events and integrated communication strategy. It not only tells the story of Lamborghini’s passion but also guides the team in designing and building the dream vehicles.

Ortenzi told Marketing that Southeast Asia accounts for 15% of the entire sales in Asia Pacific, which also includes its biggest markets Japan and China. He described Southeast Asia to be a “very heterogeneous part of the world”, with the cultural and national peculiarities being reflected in the purchasing behaviour of various consumers.

Despite this, a common aspect unites all Lamborghini consumers and that is the willingness to enjoy life and the pleasure found in owning its cars. According to him, Lamborghini enjoys “strong brand equity” in Southeast Asia due to its unique products, strong market presence and loyal consumers.

“Time changes form, not substance. The key to the timeless success enjoyed by Lamborghini lies in our attention to design and the constant search for the innovative solutions,” he explained.

While its challenge lies in preserving its strong Italian tradition whilst embracing modernity and resonating with customers from different cultures and backgrounds, Ortenzi said that striking this balance through creativity and imagination has enabled the company to push boundaries, consistently delighting consumers in Southeast Asia and beyond.

Digital as a way of communication rather than investment

Meanwhile, Ortenzi declined to reveal the value of its monetary investment in digital, explaining that it always endeavours to use new technologies as an innovative brand. As such by extension, it does not see digital as part of the marketing investment, but rather as a way of communication. This includes its Lamborghini Unica app which was launched last year to deliver personalised customer service.

“Outside the driving experience, Lamborghini stays connected through digital communication tools. Every piece of content is conceptualised and adapted to mobile – app, vertical and quick to load. It also collects data from its customer touch-points to better understand consumers and tailor bespoke experiences.

A new entity will be set up to develop and operate the Toast Box brand...

As early as January, Filipinos are browsing lifestyle options for the summer. According to Google Trends, millions are looking up ..

Disney snatches up Fox in acquisition worth US$71.3bn in cash and stock

The acquisition will significantly increase Disney's international footprint and expand the content and distribution...

After a six-week search, Schwarzkopf finally picks its 10 ambassadors who got lucky with a year’s supply of products and huge task..