Internet advertising tops in global ad spend once again, but growth is slowing

Last year, internet advertising overtook traditional advertising on TV to become the biggest contributor to ad spend in terms of medium (37.7%). However, as the medium matures, growth will likely slow as well despite being the fastest growing, according to Zenith’s recent advertising expenditure forecasts.

Within internet advertising, display is currently the fastest growing subcategory with a 13% annual growth forecast to 2020. This encompasses traditional display (such as banners), online video and social media. The study explained that all three types had gained from the transition towards programmatic buying, allow agencies better target audiences with personalised creative.

Meanwhile, online video and social media are also driving internet adspend growth, expected to grow at average rates of 18% and 16% a year respectively between 2017 and 2020. Paid search and classified are now both “lagging substantially” behind display. Search is growing at 8% a year, and classified at 6%. 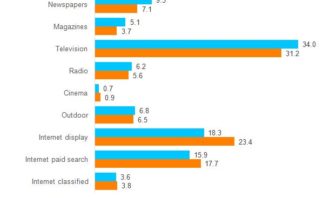 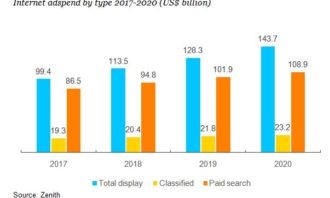 Overall, global advertising expenditure is forecasted to increase by US$75 billion in total from 2017 to 2020. Out of that amount, the US (26%) will contribute the most, followed by China (22%), India (5%) and Indonesia (4%). Meanwhile, the study outlined that seven out of 10 largest contributors to global ad spend are rising markets, namely Indonesia, Philippines, China, India, Brazil, South Korea and Russia. These seven markets will also contribute 57% of additional ad expenditure.

Growth in Advanced Asia group of the study is forecasted to be at 3.2% average annual growth to 2020. Countries under this group include Singapore, Hong Kong, Australia, New Zealand and South Korea. According to the study, ad spend for this group had grown 5.3% in 2015, which was considered the best performance since 2011, but slipped back to 1.9% in 2017. 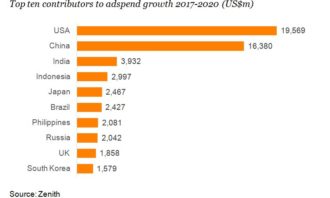 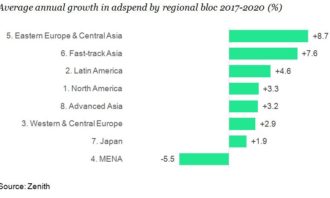 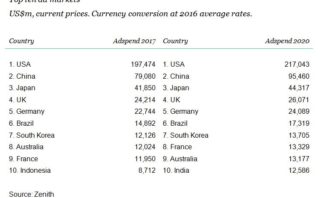 Meanwhile, the Fast-track Asia group in the study, which comprises Malaysia, Indonesia, China, India, Pakistan, Philippines, Taiwan, Thailand and Vietnam, is seeing a slowdown in growth. This is because some of the region’s markets such as China which have achieved substantial scale. That being said, growth is still expected to rise to average of 7.6% a year to 2020.

According to Zenith, this number is less rapid than the growth in Eastern Europe and Central Asia region. However, the Fast-track Asia group is 10 times larger, contributing more to global ad spend growth in dollar terms.

In 2018, the agency is predicting that global ad expenditure will grow 4.5%, reaching US$581 billion by the end of the year. The forecast is US$1 billion higher than its previous forecast, following an overhaul of its estimates of ad spend levels in the Middle East and North Africa.

Versace tipped to be sold to Michael Kors, sparks backlash from fans

Volkswagen reaches out to youths

The two carriers expect to begin codeshare and interline agreements that will give customers access to destinations in China, as w..

The three storylines communicate comedic scenarios of life’s “road block” encounters in which the PayDirect function acts as the k..

Here are the leading players in the space...

TAFEP has reminded Nas Daily founder Nuseir Yassin to give Singaporeans "due consideration" for vacancies at its Singapore office...