Consumer confidence in Hong Kong has tumbled drastically and reached its lowest since the past six months, according to the latest Mastercard Index of Consumer Confidence report.

Calculated on a scale of 0 to 100, with zero as the most pessimistic, 100 as the most optimistic and 50 as neutral, the index saw consumer confidence dropping by 12.4 points to 32.1 in the first half of 2016, moving the Hong Kong market from neutral into pessimistic territory.

It also marks Hong Kong as the second most significant deterioration in Asia Pacific markets, with Indonesia (-14.7) ranking first and Singapore (-10.7) ranking third.

All of the five economic factors in Hong Kong, including the confidence on economy, regular income prospects, the stock market and consumers’ quality of life declined, with outlook on employment (-20.9) contributing the most to the drop.

In comparison, overall consumer confidence in Asia Pacific holds steady, increasing by just 0.05 points to 59.72 in H1 2016 from 59.67 points in H2 2015. Taiwan recorded the largest gain back by an improvement in all components, the largest coming from heightened expectations in stock market movements.

China remained stable with a gain of 1.4 to 76.0, staying in the very optimistic category.

Seven out of 17 markets saw a deterioration in confidence levels compared to H2 2015. 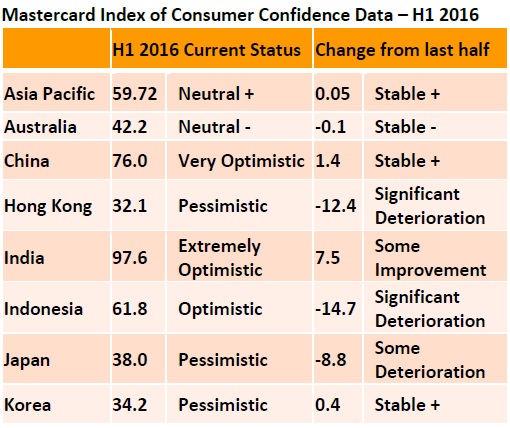 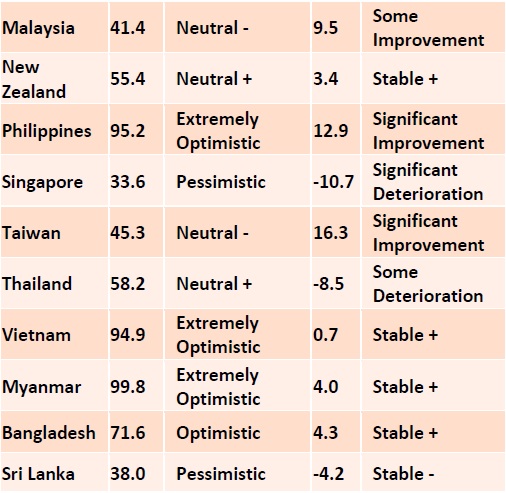 “Even as emerging Asia continues to drive the region’s growth, governments and businesses need to ensure stability and strong fundamentals in order to weather future external shocks,” he said.

The MasterCard Worldwide Index of Consumer Confidence is based on a survey conducted between June and July 2016 on 8,746 respondents, aged 18 to 64, in 17 Asia Pacific markets.

FedEx Express has rolled out an ad campaign to help a small hot pepper sauce business to go global by delivering its product aroun..

Trends to look out for ahead of the holiday season

"Many shoppers want to interact with retailers' products and the brand in-store, and the ability to pick up online orders in-store..

What it takes to rejuvenate a brand

Matthew Cheng, group account director at Grey, says the most important elements to revive a brand are culture, product and persist..