With aims to drive awareness of the latest product launch, whilst boosting brand exposure and driving sales, a mobile gaming strategy was taken.

By selecting the right platform to amplify its branding and by preaching to the right target audience, the campaign delivered more than 14 million impressions in just two and a half months.

Aiming to build brand awareness and increase conversions from its website, Jetour adopted several strategies to engage customers, including the use of native ads.

The event saw key industry figures and other noteworthy guests gather to celebrate the achievements of outstanding financial institutions and services.

“After more than two decades of hard work, Asiaray has built a rock-solid foundation in the Greater China Region with a business network covering 40 cities. But we want more, which is why we have kept looking for suitable opportunities to take our business overseas"

The Agency’s mission is to use digital to make the analogue world better through the creation of world-class customer experiences and communications, powered by intelligent data and innovative technology.

Marketers have invested immense effort and resources into building communities, nurturing engagements, and adapting to the rapid changes in gameplay and house rules.

Verizon Media has announced the winners of the “Asia Big Idea Chair Awards 2019” (Asia BIC Awards 2019), with brands such as Wyeth Nutrition, Lenovo Legion, Manulife, and Sony Pictures Taiwan, as well as a host of agencies ranking among this year’s champions.

Held on 15 January at the St Regis Hong Kong, the annual event celebrated the wealth of remarkable advertising campaigns and ideas that featured on Verizon Media in Asia throughout 2019. With 16 given to Hong Kong-based campaigns and six to those around Asia, a total of 22 award categories were presented to Asia’s best digital creative minds.

Now marking its 11th year, the  Asia BIC Awards has reached a new landmark in recognising digital creativity in the dynamic digital world for over a decade and becoming an acclaimed regional event that draws entrants, attendees, and enthusiasm from Hong Kong, Taiwan and across Southeast Asia. Considering the incredible digital evolution that has taken place since the awards first launched in 2009, Rico Chan, co-head, Verizon Media, APAC commented:

“Being in the 11th year, this year’s Asia Big Idea Chair Awards officially means we’ve graduated into the next decade. We’re delighted to have received more than 360 submissions from across the region and across a number of sectors that all espouse perfect marriages of digital technology and creativity. Frequented by more than 900 million consumers globally, we at Verizon Media have witnessed countless innovative, immersive and exciting digital experiences across various channels.” 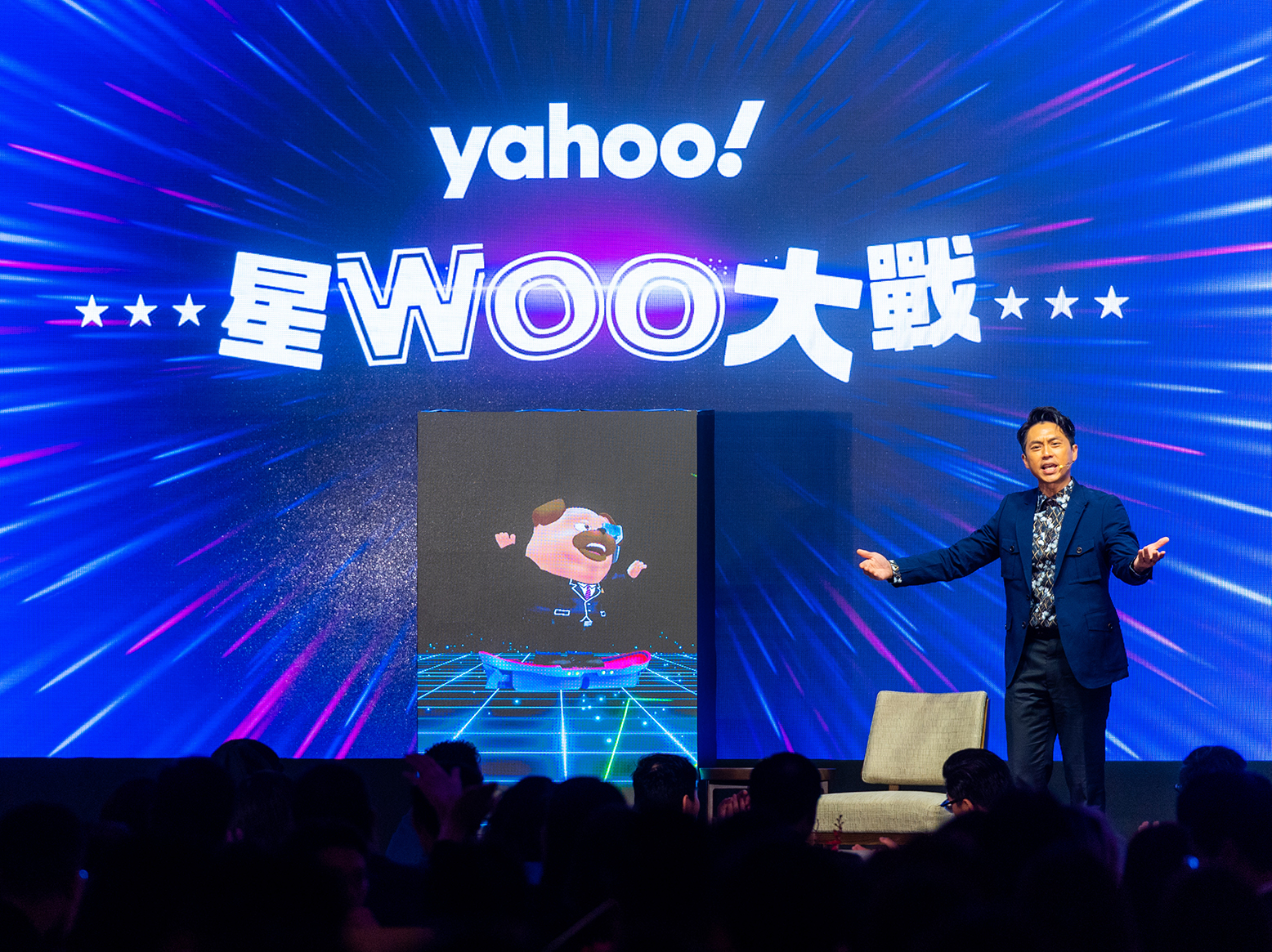 Reacting to the win, Traci Chow, executive business director of Wyeth Nutrition said, “Wyeth Nutrition believes every baby deserves the best of care, and we are the companions of moms and dads in Hong Kong. This campaign served to debunk a lot of myths around breastfeeding. Verizon Media played a significant part in this by garnering the eyeballs we needed. Not only it generated insight-led content for our brand, but the campaign has also provided a range of advertising solutions from display to programmatic ads that amplified our messages across. The partnership with Yahoo TV contributed over 18 million impressions, over 77,000 meaningful engagements. In the era of data, we strive to adopt ground-breaking data-driven ways to engage with Hong Kong parents.” 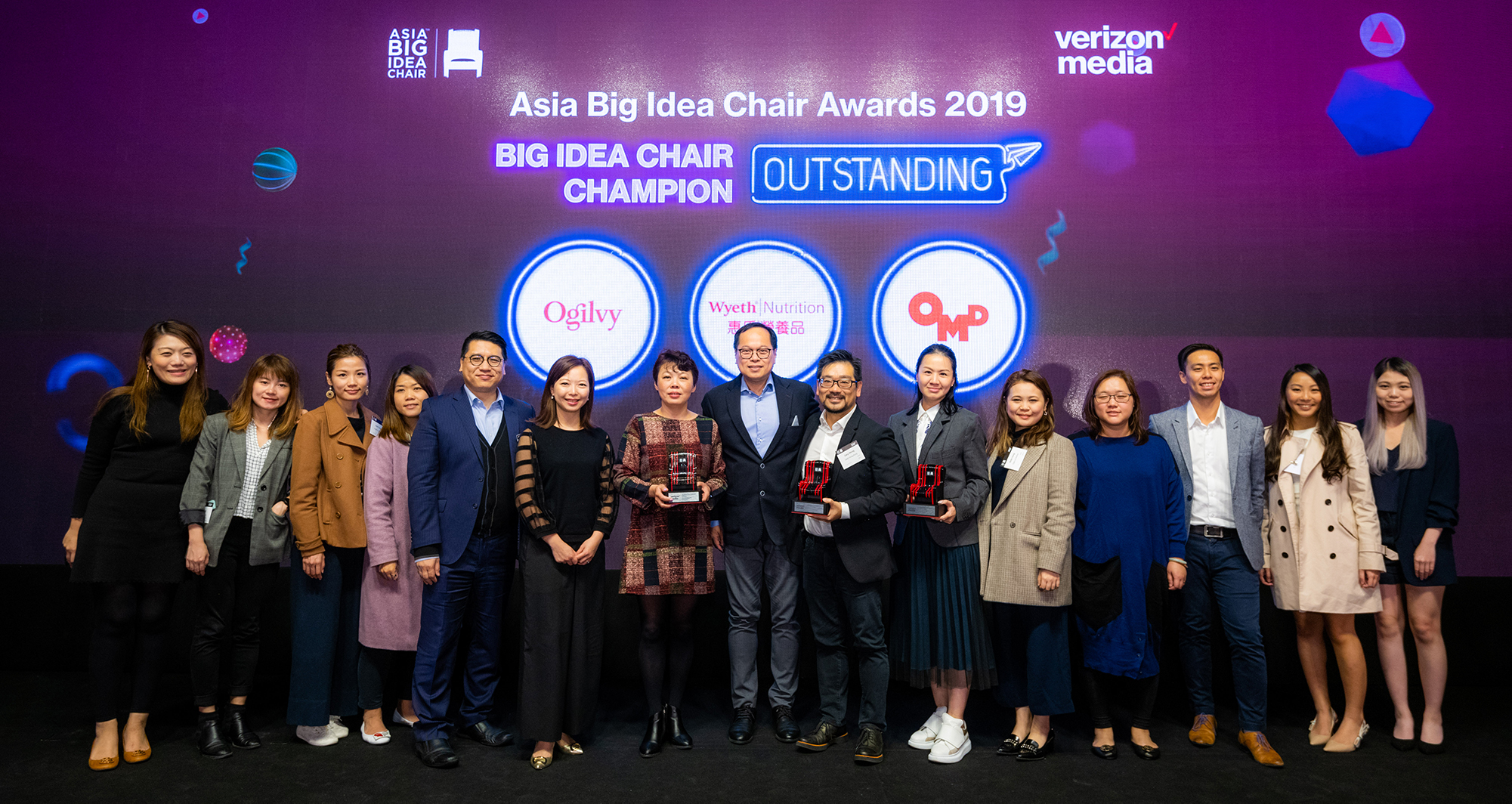 Amy Wong, AP consumer marketing director of Lenovo explained their winning streak saying, “‘Legion of Champions x Yahoo Esports Games On 2018’ was a trailblazer in introducing esports to the general public. The partnership with Verizon Media made it possible: whether it’s initial recruitment, creating an edutainment program with local celebrities, or the grand finale event at Harbour City was live-streamed beyond Hong Kong to Taiwan. The Esports Live Event attracted over 411,000 live views, and over 2.2 million views across social platforms. The native ad CTR is three times higher than industry benchmark. We effectively topped Apple and became the most preferred brand for gamers. We look forward to further collaborating with Verizon Media for future campaigns to come.” 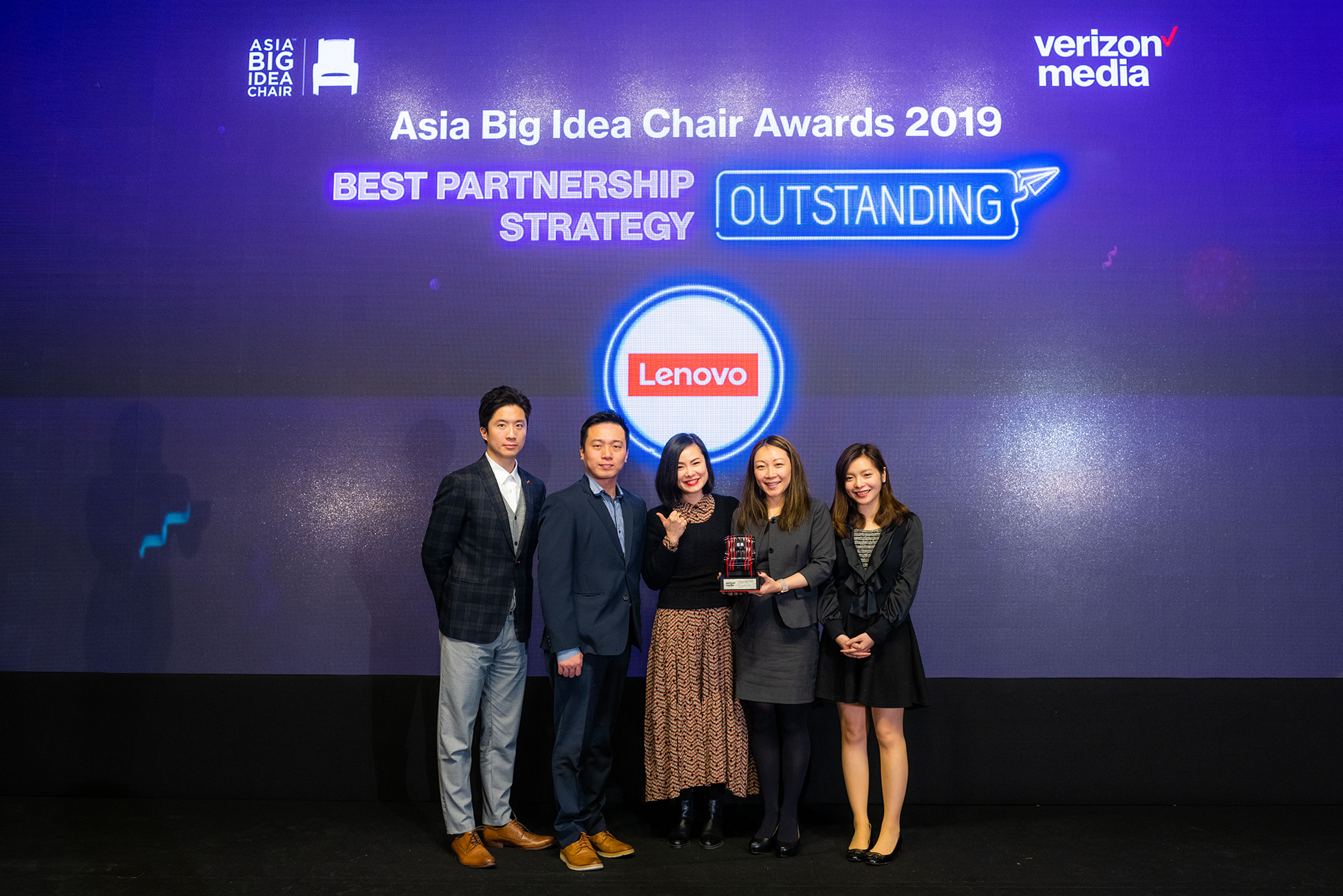 Commenting on its victories Isabella Lau, chief customer officer at Manulife Hong Kong said, “Manulife's Gen-Y PlanSimple campaign showcased a series of insight-led videos featuring influencers to deliver messages that target varying life-stages of our customers, effectively communicating the importance of retirement planning.  Through the integration of display, native and programmatic ads, we increased brand awareness and successfully retargeted interested customers. With the help of Yahoo, our enquiry conversion rate increased by nearly 500%, and we over-achieved our campaign KPI by 324%.” 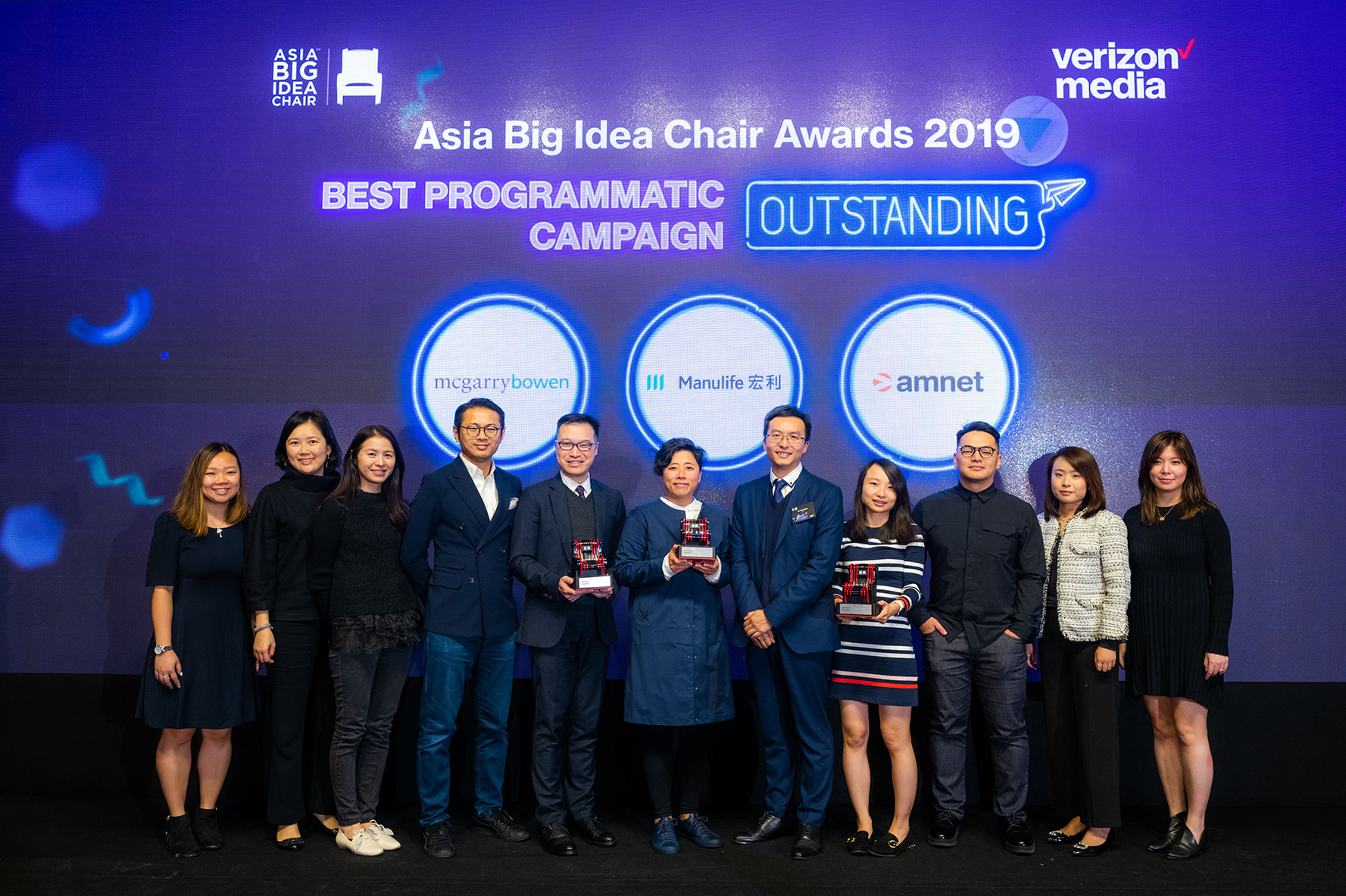 There were other high scorers on the night. Sony Pictures Taiwan was crowned king in Asia, taking home Best Mobile Strategy, Best AR/VR Experience as well as the revered Asia Big Idea Chair Champion Award. Meanwhile, on the agency front, Oglivy & Mather was named Advertising Agency of the Year; Mindshare Hong Kong as Media Agency of the Year, and Amnet Hong Kong Programmatic Agency of the Year.

Originating from Yahoo! Inc., the Asia Big Idea Chair Awards have always focused on honouring innovative exceptional digital campaigns that amalgamate imagination and cutting-edge technology. And with several fantastic advancements on display, this year was no exception,

Offering his thoughts on some of the tech that was shown off and what’s to come in future, Chan said, “This year, we were so impressed to see many brands are starting to adopt AR/VR technology and to bring immersive content experiences in their campaigns. We expect this trend will keep going in the next few years with the introduction of 5G technology.”For the full list of all the night’s very deserving winners please visit the official website at https://yahoo.digitaladvertising.com.hk/bicawards/asia2019/.

With 84% of Chinese outbound travellers making purchases at airport retailers, it’s no surprise that brands are jostling for a position to capture Chinese outbound tourism expenditure, making this channel a critical battleground.

Expanding the boundaries of ‘proptech’