Jayden Tan, former photographer and creative group head at GOODSTUPH, was quick to apologised on public platforms after netizens and the artist pointed out striking similarities between a recent photoshoot he did for Chuan Pictures and works of Indonesian artist, Leonard Suryajaya.

Tan who resigned from the agency two months prior to the incident, and is serving his last days with the local creative agency, said in a statement to Marketing that he recognises that the style is “heavily referenced” from Suryajaya, and was “not properly developed” due to the tight timeline causing the images to look too similar.  He added that he has reached out to Suryajaya to apologise and added credits on his personal social media posts where he can.

Furthermore, he clarified that the photoshoot for Chuan Pictures, film director Royston Tan’s production arm, was non-commercial in nature and is meant to be a series of fun staff portraits to commemorate the company’s anniversary.  “I have changed the caption on the post of mine to explain where it’s been heavily referenced from. Unfortunately I don’t have access to Chuan’s platforms and I not able to add the credit to Leonard in those accounts,” he added.  He explained to Marketing that he first saw Suryajaya’s works at a photography festival earlier this year, and the inspired concept was one of three proposed to Chuan Pictures.

On Suryajaya’s post, Tan said: “On hindsight, I think we went too close to your amazing work so much so that it feels like a blatant copy. Trust me I have nothing but respect for your work. As an artist to an artist, it pains me to let this happen like so. Not that this solves anything, but I wanted to stress that this wasn’t a commercial shoot and I didn’t receive anything for it. Please let me know what I can do about this and I will try to resolve it to my best capacity. Again, I am very sorry for my mistake, and love love love your work man.” 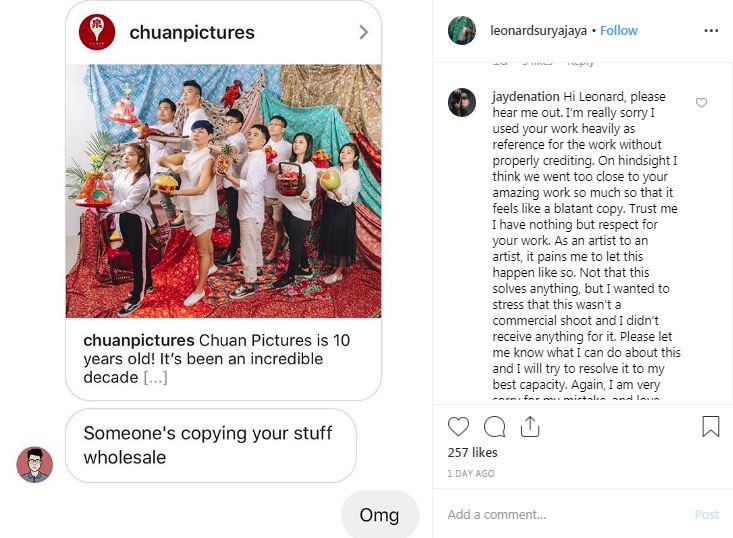 Meanwhile, Suryajaya told Marketing, in a statement that re-creating other artists’ work is common for students and photographers who seek to improve their skills and aesthetics.

However, in his view, Tan failed to disclose his influence or reference in his initial post. “I felt very good about myself and embarrassed for him. It was rewarding to me to find out that I was a cultural reference,” he said. According to him, differences can still be found between Tan’s creations and his. He described Tan’s style as more “sterile, clean, put together and impersonal”. Here are some of Suryajaya’s works:

Gearing up for @expochicago. See you there in a month!!! – Kinfolk Lip Sync, 2017 #leonardsuryajaya

#Repost @cpwwpc ・・・ From my experience growing up in Indonesia and immigrating to America, I’ve realized more fully that individual and social hardships do not exist in isolation. Regardless of their location in the world, oppression, ethnic cleansing, cultural distrust, and displacement are always present—as is the need to form a distinct identity in the context of changing cultures. It is a script that gets remounted year after year with new actors and different staging. Sharing my experience and the experience of those close to me not only give us a voice, but speaks to others around the world in similar situations. – #cpwinstagramtakeover by @leonardsuryajaya

“It feels very reductive of my works. I don’t have to answer how similar I think his work is to mine since he already admitted that I was an influence,” Suryajaya added.

Last week at Innovfest Unbound, Tan who has worked at GOODSTUPH for three years announced his departure to start up his own photography business called HeadQuartors.

Marketing has reached out to Goodstuph and Chuan Pictures for comments.

Surreal or stupid? WATCH LG’s “most human phone ever”

See how LG is promoting its new G Flex model, dubbed by one viewer as the dumbest commercial yet. ..

WhatsApp to feature ads: Can it balance between monetisation and intrusion?

"As a listed company, you have to show growth in your ad business. So you will start to push more ads to users who in return, will..

David Fox will be taking on the role of CEO of Ogilvy Australia. ..

"I was not adjusting to the curve of social media fast enough. The consequence was that for the first few years, we missed our goa..

Reportedly, Cathay will have to reduce its workforce as part of cost reductions, as some analysts say the company will report a fu..