In light of the Land Transport Authority (LTA)’s move to ban e-scooters from footpaths, food delivery company Grab has informed consumers of longer waiting time and possible cancellation in orders. A Grab spokesperson told Marketing that over one in three GrabFood delivery-partners rely on e-scooters to fulfill orders.

According to Grab, riders will require time to switch to other modes of transport and asks for consumers’ understanding in delivery disruptions. The spokesperson also said that the company will be working with the government on potentially allowing certain riders on the footpaths following their disciplinary. The company will be aiding affected partners and will reach out to those impacted by the end of this week.

With the new direction, GrabWheels will suspend its shared ePMD service progressively from 5 November. “All existing ride-plans will be refunded in the next 30 days to users’ credit cards. Grab remains committed to serving Singapore and will explore other ways to serve our users with alternative active mobility options,” the spokesperson said.

Meanwhile, Deliveroo will stop working with food delivery riders who use e-scooters on footpaths. In a statement to Marketing, a Deliveroo spokesperson said the company will inform and remind riders of the rules and regulations set by LTA. In cases that e-scooter riders continue to use the footpaths, Deliveroo will stop working with these “errant riders”. However, the company’s spokesperson said that there will be “minimal impact” on the business as PMD and power-assisted bicycle riders make up 5% of the overall Deliveroo riders. The company had initially stopped onboarding new riders on PMDs from May 2019, in light of the recent regulatory changes and public concern.

“Safety is of utmost importance for Deliveroo and we are speaking with our current riders on PMDs on how to best support them moving forward, including the possibility of helping them to transition to different vehicles if they prefer,” the spokesperson added. 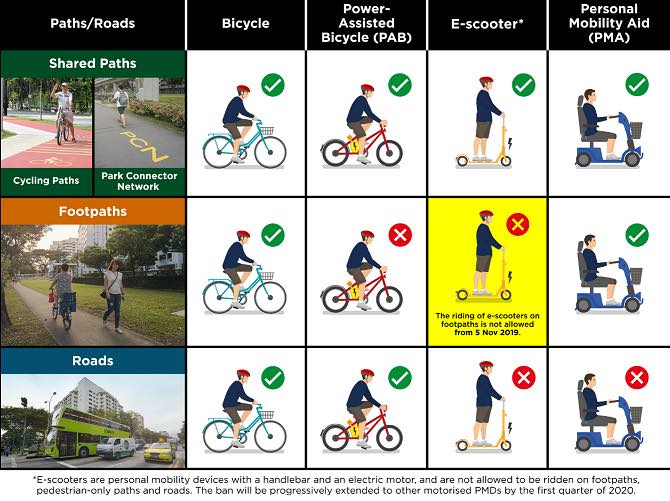 LTA first revealed the ban yesterday to the general public, taking into account the recent accidents related to the use of e-scooters on footpaths. E-scooters can only be ridden on cycling paths and Park Connector Networks, while the current policy of disallowing PMDs on roads remains.

Since the Active Mobility Act was passed in Parliament in February 2017 to allow the use of PMDs on public paths, LTA has sought to encourage the responsible use of these devices through education, enforcement, regulations and infrastructural enhancements. Despite significant efforts, offences relating to errant behaviour and incidents involving e-scooters remained on an upward trend.

“This has led to much anxiety among pedestrians, particularly more vulnerable groups such as the elderly and young. In the wake of recent incidents involving errant e-scooter riders, LTA has conducted a thorough safety review and will take decisive action to restore safety on footpaths,” a statement by the organisation read. In addition, the Minister for Transport has also issued a safety directive prohibiting e-scooter sharing services, hence LTA will reject all existing licence applications and will not be inviting applications for PMD sharing licences until further notice.

According to the LTA, warnings will be issued to those caught riding on footpaths from 5 November until 31 December, while strict enforcement action will be taken after this period. Offenders may be fined up to SG$2,000 and/or jailed up to two months.

From big trends to micro-moments: How are you using data analytics?

Coca-Cola and Media Prima owned television station TV3 have collaborated to reach out to Malaysian youth through music in the late..

Hong Kong continues to be the world’s most connected population

adidas mocks Under Armour in its latest Chinese ad

Just four months after Under Armour announced plans to up its pace in China, adidas has decided to take a jab at its rival...

YouTube sees a new CEO, proving again females are at the helm of innovation

YouTube has announced that Susan Wojciciki will become the next CEO, proving that females do, in fact, strive in innovative enviro..