When Dayo Wong Chi-Wah (黃子華), a glib-tongued comedian known for his quick-witted talk shows, plays a starring role in csl’s new TV commercial, we know the company is out to make a big statement.

Developed by csl agency Uth Creative, the TV commercial is csl’s biggest branding initiative this year, launched to ramp up the promotion of its exclusive 300Mbps high-speed network to consumers.

The spot features an array of sentimental subject matter from everyday life, which point to a message that the concept of speed can determine the course of your life. It can be as simple as gaining more friends by posting pictures quicker, or as disruptive as losing your boyfriend when you fail to make instant responses to his messages.

Through the voice over by Wong, this commercial tries to warn you that quickness is the essence of life.

“Our high-speed network will continue to be the core value in our brand communications mix in the long run as it has a deep influence on our daily lives.”

Like many of Wong’s talk shows, all the scenarios in this commercial come from reality, he noted.

“Through that we hope to mark the importance of being fast in our daily lives. Wong and csl have a shared vision on this,” said Lam, who described Wong as a perfect brand spokesperson because his quick-witted public image perfectly coincides with csl’s pursuit of high speed.

The competition in the smartphone market is fierce; new devices with similar formats and features are popping up all over the market. The high-speed differentiator, Lam noted, is needed at a time when the unstoppable wave of new smartphone launches has prolonged the smartphone replacement cycle.

“Consumers are waiting longer to change their smartphones as there are just way too many new apps and features being pushed out on the market, and this phenomenon is happening globally.”

A faster network, he stressed, is therefore served as an incentive to persuade consumers to change new phones.

Launched on television and in print, this campaign is part of csl’s bigger incremental marketing approach to introduce its core high- speed feature, which started last year with a print ad putting its 300Mbps network offering in the limelight.

The ad, created also by Uth, features five of what it calls “gentle giants”, deploying advanced mobile broadband networks into the land of Hong Kong to represent the efforts the company has put in to allow access to a faster network. 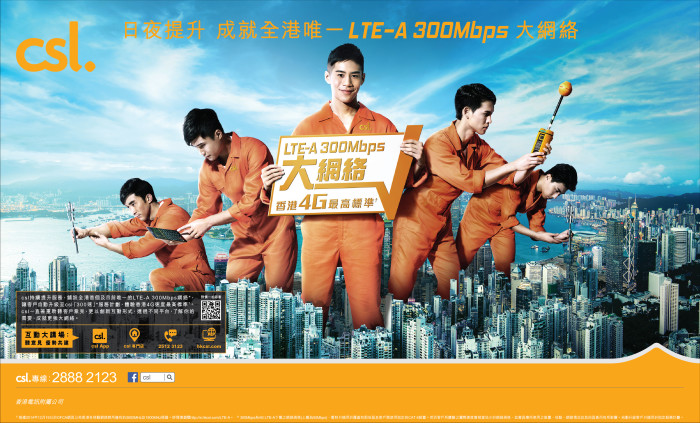