Cathay Pacific has undoubtedly won over the hearts of its consumers after announcing that it would honour the tickets it sold at an enormously discounted price.

Some netizens found out the “special surprise” on Cathay Pacific’s website, showing the very low fares between Vietnamese destinations and American cities as first class tickets costed only US$988 (about HK$7,750) and business class tickets were priced at US$675 (about HK$5,300). 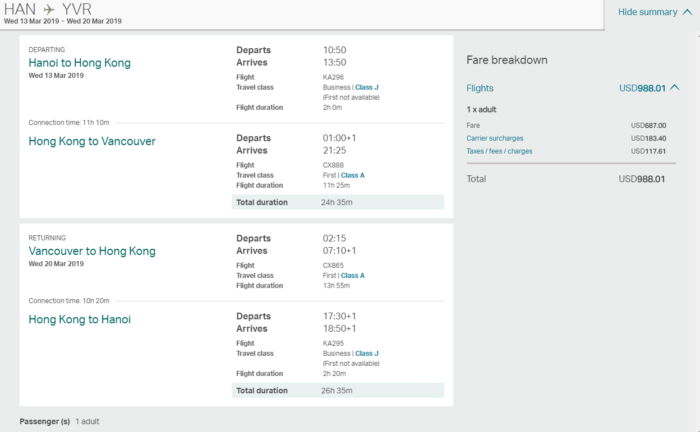 On 2 January, the Hong Kong-based airline said on its official Facebook page and Twitter account that “we look forward to having you on board and delivering a premium travel experience to you soon!”, meaning the tickets are valid. It also said the tickets were “one of our good – VERY GOOD surprise ‘specials’” with hashtag #promisemadepromisekept #lessonlearnt, or #新一年繼續多多指教 #從小就學會錯就要認 in Chinese. 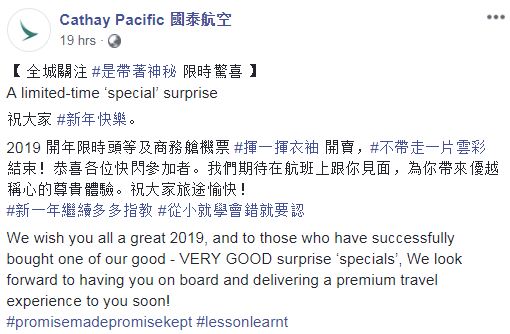 Netizens welcomed the news as some of them said “This will be my first time to taking First class , Thank you for gift !! thank you for your honour!” and “Thank you cx for honouring a promise”.

Cathay Pacific did not share how much honouring its promise would cost to the company. However, the round trip first class fare with taxes and surcharges per adult between Hanoi and Vancouver now costs about US$38,000.

South China Morning Post said several thousand tickets were believed to be sold in the incident. The report also said it was an individual entering the wrong fares into the company’s system. SCMP have contacted talked to 11 people who had bought 18 first class and eight business-class tickets, Cathay should have collected almost US$685,800 (HK$5.4 million) from them.

The e-commerce giant is rumoured to have just launched a global review. But what does it need to really succeed in Asia?..

Tiger Beer takes on a black lager and German twist

Tiger Black and Tiger White are the brewery’s take on the classic black lager and German wheat beer..

The telco will be drawing on information from Internet platforms to show what the community is discussing and reading regarding Te..

SPH ties up with ZBJ network

Service categories available include design, IT, marketing, printing, copywriting, translations, video and animation, and others...

An unspecified number of fraudulent GOJEK rides and flat-fare subscription plans are being organised and facilitated by third-part..