It looks as though the predictions about Alibaba's Singles' Day were true.

The online and mobile commerce giant has smashed all previous Singles' Day records, notching up a staggering RMB 91.2 billion (US$14.3 billion) in the 24 hours of the 2015 11.11 Global Shopping Festival.

The day started well for Alibaba, which revealed that US$5 billion (approximately RMB 31.8 billion) of gross merchandise volume (GMV) was settled through Alibaba’s China and international retail marketplaces in the first 90 minutes of the day. From there it just grew and grew. 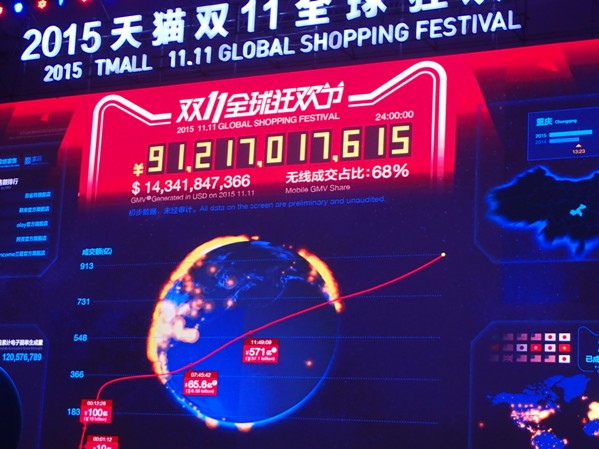 "Over the course of the 24-hour shopping marathon, consumers will have a new surprise every hour that has been especially tailored for mobile users. The whole world will witness the power of Chinese consumption this November 11.”

In the hours leading up to the official midnight start of the Alibaba Group 2015 11.11 Global Shopping Festival, almost 130 million users visited the Mobile Taobao app, exceeding the peak volume during the 2014 11.11 Shopping Festival.

Some the staggering figures include:

· Total GMV settled through Alipay was US$3.9 billion in the first hour.

· Mobile GMV settled through Alipay was US$2.9 billion in the first hour.

· Total number of mobile buyers was more than 27 million in the first hour.

Additional highlights released by Alibaba include:

The gala launch of the e-shopping extravaganza was joined by a host of celebrities including James Bond actor Daniel Craig (pictured).