AirAsia Foundation, theĀ philanthropic arm of AirAsia Group, and REXKL have collaborated for a festival titled Made-in-Malaysia, which aims to highlight what makes a country a true melting pot. Made-in-Malaysia aims to promoteĀ unity among Malaysians, and showcase the multicultural nation as a multi-faceted gem to locals and visitors alike.

Formerly the iconic Rex Cinema, REXKL has been transformed into a multicultural creative and entrepreneurial hub.Ā It houses Destination: GOOD, AirAsia Foundationās flagship social enterprise hub that currently retails more than 400 responsibly and ethically produced goods from more than 30 social enterprises across Asean. Destination: GOOD, a retail space and a movement that encourages people to shop and travel sustainably, aims to foster collaboration between Asean social entrepreneurs and community-based enterprises.

AirAsia Foundation executive director Yap Mun Ching said: āThis festival is about celebrating diversity while strengthening unity. By promoting different cultures and fostering a sense of community, we hope to create an environment whereby all Malaysians can thrive and succeed.ā

Separately, the airline also launched theĀ āShred & Flyā campaign to urge the public to shred their unused credit cards in exchange for free flights to any of its 150 destinations. āShred & Flyā is part of AirAsia BIGās recently-launched āEarn BIG Live BIGā campaign to encourage people to live BIG and do something thatās out-of-the-ordinary. 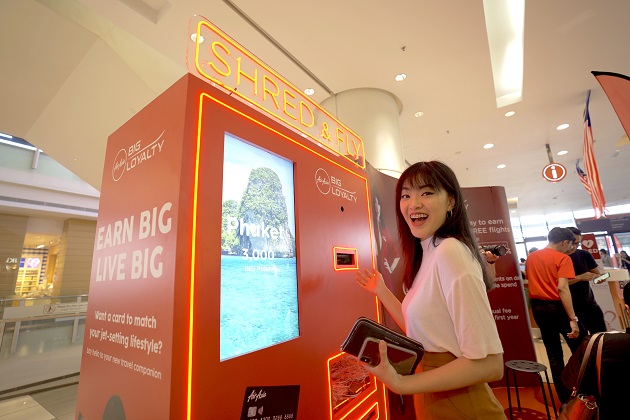 āThe Shredderā will be placed at various locations from 6th to 22nd September 2019 with Nu Sentral Shopping Centre being the first stop, before making an appearance during Minggu Muzik Malaysia at Dataran Merdeka (14 to 16 September 2019), and then at MyTOWN Shopping Centre (20 to 22 September 2019). The aim is to raise public awareness that spending with the AirAsia Credit Cards is the fastest way to earn BIG Points to redeem AirAsia flights.

Any visitor with unused credit cards are invited to challenge themselves to insert those cards into āThe Shredderā. The shredded credit cards will not go to waste, as consumers will receive a minimum of 3,000 BIG Points to a maximum of 100,000 BIG Points each upon successful application of the AirAsia Credit Card ā which can be used to redeem free flights as well as other travel and lifestyle deals.

Spencer Lee, AirAsia BIG’s CEO said the airline wants to makeĀ travelling as something thatās reachable and obtainable at all times. “Weāre always striving to understand our customersā needs and wants while figuring out different ways to make travels unrestricted as possible. With that in mind, AirAsia Credit Cards allow more people to delve into diverse BIG experiences, where everyoneās travel and lifestyle aspirations are within reach,” he said.

YouGov's latest brand advocacy ratings show Rolex topping the list for the second year in a row with a score of 65.8, while Netfli..

This is to highlight the importance of older workers in the workforce. ..

Here are 15 ways that would help you please the search machine - because it can be hard to know what Google wants in this day and ..

The Lumenere Group and BlinkAsia merge to form new agency

CATLYST/TV has been formed from the merger between two prominent content and media companies, The Lumenere Group and BlinkAsia...

The AlipayHK Futureland features five zones where customers can buy books and accessories from eslite Spectrum and settle their bi..